I was going to a Father's Day break post today, either Court Kings of the Father's Day packs. But, since my LCS had some new stuff in, I opted to try a pack. I stayed away from SP Authentic, and embraced the cheaper randomness of Goodwin. 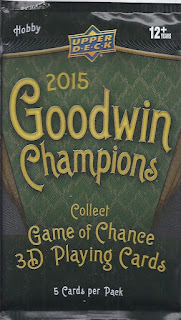 Here's your pack. Standard UD 5 card per pack of their non low-end releases. 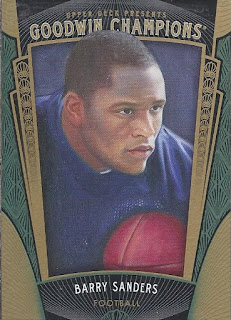 And here's the first card I get. A nice one for me, as Barry was one of my favourite players back in the day. Of course, since it is Goodwin there are no logos anywhere to be seen, even for guys who they have the license for the set. The borders look nice - maybe a little busier than previous years. 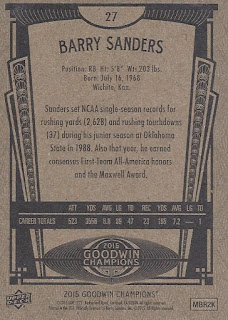 Here's the back. Pretty standard for this set. 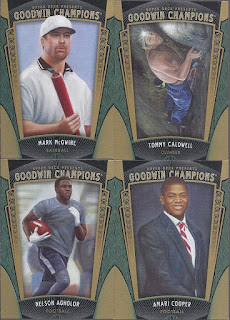 And here are cards 2 through 5. Baseball, football and rock climbing. Sounds about right for one of these releases. Amari was the 4th overall draft pick, so that's a pretty good grab in terms of base cards. As for Agholor, he should win the "Worst Rookie Autograph" with ease this year. Don't believe me? Try and top this debacle: 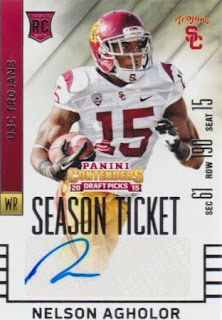 Horrible. Panini should have returned those stickers with a drawing of a middle finger. Unfortunately, he was a first round pick, so there will probably be more to come like this. I feel sorry for Eagles team collectors.

Now, that card obviously wasn't in the pack. I just grabbed this on ebay as an example of Mr. Agholar's horrid penmanship. But there was a 6th card in the pack: 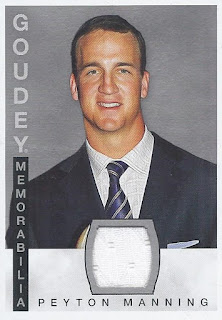 Another football card, but a very good name to pull. Even with it being a plain white swatch. 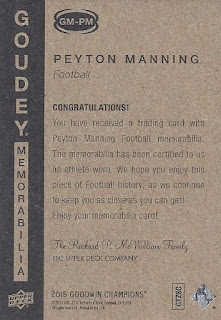 The description on the back is pretty cryptic, meaning that swatch good be from an old t-shirt that Peyton wore while he was painting the garage. But, given the nature of this set, it is kinda suitable.

And there you go.

Father's Day stuff tomorrow. I swear!
Posted by buckstorecards at 11:57