I was really happy to see Court Kings pop up as one of the options in the Father's Day breaks. It is my favourite mid-range basketball product of the past year. In fact, if I had the druthers to bust a case of a mid-level product, I'd be all over this. Decent hits, as well as a really nice variety in design throughout. Plus, the backgrounds take me back to the Perez card of the 80s and 90s. Which I assume was the intent.

Anyhow, as the title of this post shows, the randomizer landed on the Celtics, Grizzlies and Suns. I was neutral on Memphis but happy as the other two gave me chances to enhance my PCs, whether they be Celtics or Tyler Ennis.

It turns out one of those worked well. One, not so well.

And surprisingly, it was Boston, probably the top team in Court Kings in terms of hit volume, that was the 'not so well'. 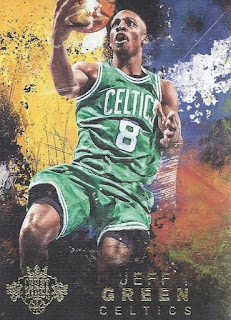 As I landed one base card of a veteran. 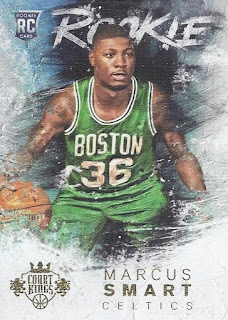 One of a rookie (although I love the look of this). 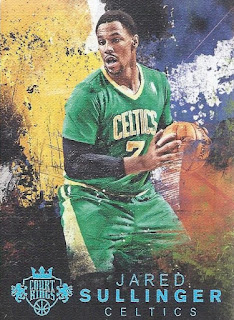 A /25 parallel of another veteran. But, I think this is my first Celtics card with that particular look in terms of jersey. So there's that. 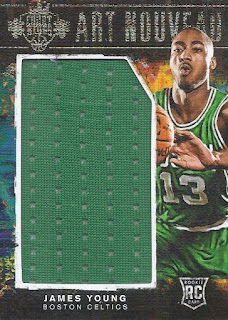 And a jumbo relic.

It seems strange to complain about a team's performance in a break when you get a low numbered card and a nice large jersey swatch, but that's how the break went for the other teams.

For example, Memphis won the base card battle with this trio of cards. And you've got an alternate jersey as well among them. 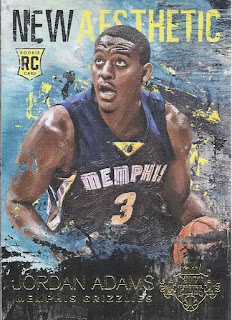 An insert as well. Although the smudging at the bottom made me check to see if my scanner had gotten really, really dirty in the meantime. Fortunately, that is part of the design. 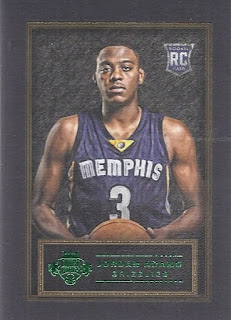 More Jordan Adams here. The difference is that this portrait card is a framed parallel (although the frame isn't quite as thick as on Gypsy Queen cards), it is noticeable. Also, it is the emerald parallel numbered to 5. Aesthetically, this really has the look of a low numbered card. By far, this was the lowest numbered card in the break for me. 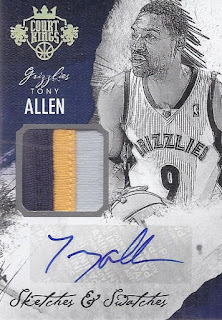 Still one more Grizzly to go, and it is a really nice one of a former Celtic and current defensive all-star. 3 colours on the swatch and a stickergraph. It really does fit into the subset of "Sketches and Swatches". 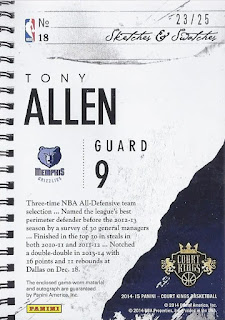 Even moreso on the back. If one can have a favourite design for a card back, this would easily contend as the school notebook look makes the 'sketches' portion of the subset even more appropriate. 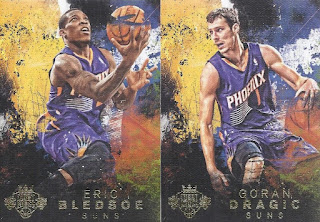 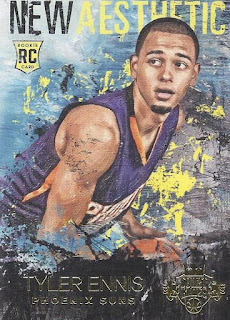 Here's my first Tyler Ennis for my CanCon collection, from the same "is my scanner really that filthy?" subset. 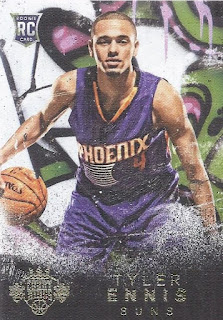 Here's Ennis #2, this from a different rookie portion of the base set, and numbered to /149. 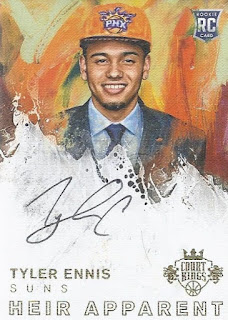 And here's #3, my second autograph of his, both on-card. This card asks the question "Is it possible to have a card with too much orange?". The answer is "Of course not". 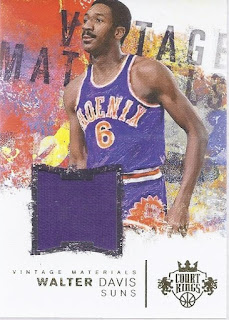 A classic Suns jersey on the relic. The interesting thing about this is feeling the jersey and realizing these couldn't have been very comfortable to wear. They're not quite burlap, but are pretty close to it. 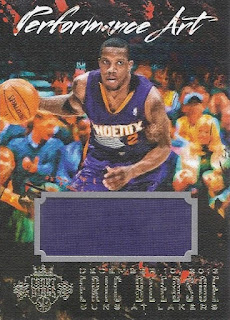 Contrasting with this, which is a nice soft swatch. It is hard to tell from the front, but Panini has included the date this jersey was used on the front of the card. 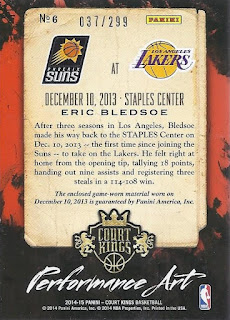 It is much easier to determine that from the back. This is a concept I'd love to see used in other sets. It sure beats the "not from any event, season or game" on other cards. 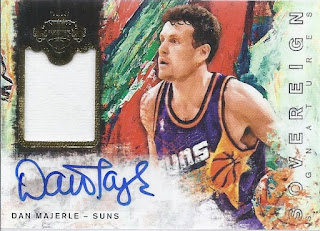 And to wrap it up, here's a combo swatch/signature of Thunder Dan.

So, definitely a successful group break in terms of hits and the variety thereof. Keepers all over the place!

Posted by buckstorecards at 18:05