Since I'll probably be up to my arse in Expo goodies starting next weekend, this might be my last of these for a while. Let's open up with a 5 card pack with a guaranteed HOFer. 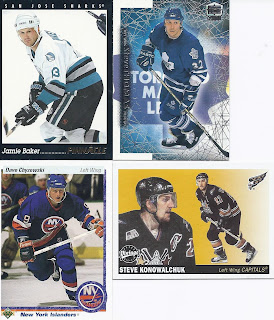 None among this group, although I do like both cards of the Steves. But who will my HOFer be? 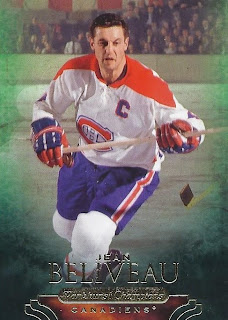 Sure, using a post retirement card is probably cheating. But I'll gladly not complain about rule stretching for a Parkhurst Champions card. I don't think there's a card in that set that isn't binder worthy.

Now, the 5 card pack with a guaranteed superstar. 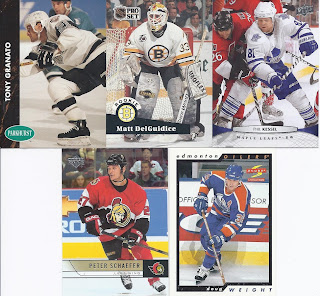 Kessel? Whatever you say. He's decent enough, but not quite what I think of when I hear superstar. The big upside of this bunch is the Peter Schaeffer. Another one bites the dust off of list of "Get at least one card of every Senator ever". 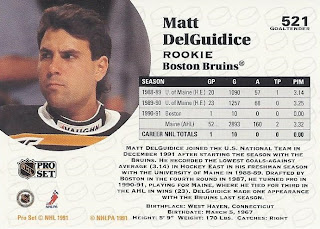 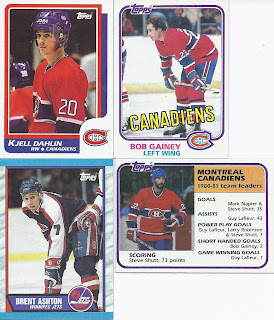 If you liked cards of Habs HOFers, this would have been the repack for you. Shutt and Gainey in the same pack. I'll forgive Bob's hair. It was the 80s. More HOFers in this pack than the actual HOF pack. Kjell Dahlin, I'd never heard of. He'd only have big league cards in this, the 1986 release.

And now, to the 8 card 90s pack. That sounds like junk wax stuff to me! 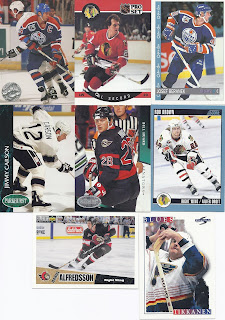 OK. While there was definitely junk wax here, there were keepers. I didn't have that Alfredsson card, so that's enough to make me pleased with these cards. Huard is another new face in my Sens collection. However, by far my favourite was the Esa. It's all about the tongue!