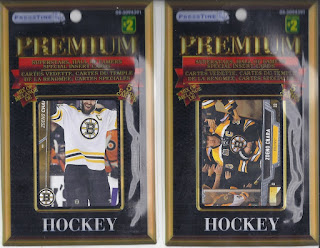 A pair of the Premium packs today. While I wasn't planning on picking these up at the ol' Dollarama this time, I was intrigued by the same player being shown on the visible card(s). So, I decided to compare the two, for competitive purposes.

For a future poset, I also did the same with a pair that had a John Tavares card as the visible one. 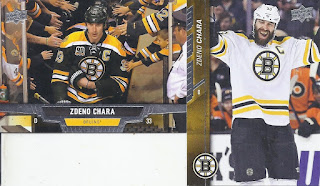 Here's a better look at the two visible Charas, with a base card from 13-14 and one from 15-16. Not really a standard photo on either of them. but the entrance photo through a wall of arms is a little less standard, so I'll vote for that. The 15-16 is nicely framed with the dejected bench behind Zdeno. 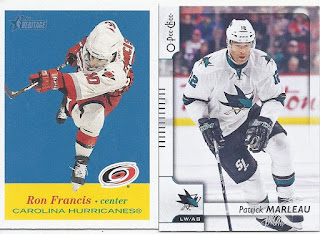 It is a little easier of a choice here, as it is hard to vote against a Heritage card from any sport, especially when it features a HOFer. 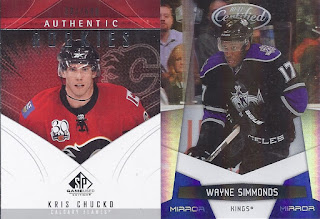 Ooo! A pair of numbered cards! That wasn't expected. Simmonds is the rarer of the two, being /100 versus the Chucko being /699. But Chuko definitely wins the obscurity factor, having played in only 2 NHL games, vs the still-active Simmonds. What wins? I vote for the Simmonds since I wasn't expecting a /100 card from this. 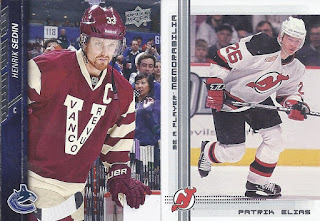 Here's the second appearance of a 15-16 card in the repack, but the throwback uniform easily puts it over the Elias card. That also clinches it for the repack with the 13-14 Chara on the front. 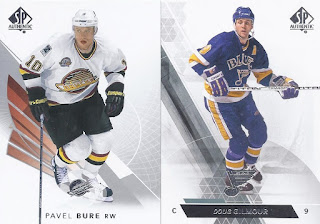 Ending with a pair of HOFers on cards out of SPA. I do like the design better on the Bure with the hint of colour, but the uniform sported by Gilmour on his card is probably my favourite from the Blues' team history. So that makes it a narrow 3-2 victory for the 13-14 Chara.
And there you have it!
Posted by buckstorecards at 07:45