Upper Deck Chronology dropped on Wednesday. While I did check out the checklist to see if any obscure Senators were on the list, there weren't any that I didn't already have an auto of, so I thought I'd pass. But, since the checklist last year did feature a lot of "Has that guy ever had a certified auto?" types, I looked at the rest of the list.

Marian Gaborik made quite a few appearances on the list, and like Sean Hill from last year, that gave me a player to chase on that team. I picked them up in a full case break for a decent price.

How'd that work out? 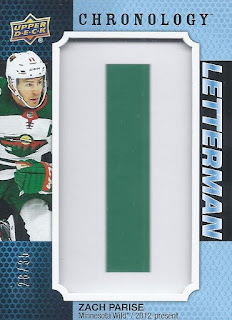 This is really the first card for me that really shows some influence of the pandemic. Last year, these were manufactured patches. While there are some of them this year, much of this set now has a slate quality to them. I've heard them compared to the material used on leaderboards for golf. I don't intend to break the acetate cover to find out. 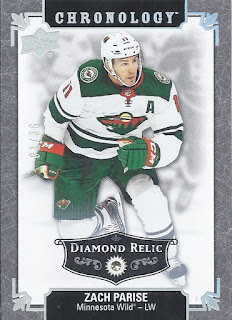 The Zach Parise gods were smiling on me, as I landed one of the case hits. While manufacturing fabric patches was out of the question, the labs were still open to create the diamond cards. And yes, that's the same photo as on the Letterman card. I don't mind it with Panini Chronicles, since that's a mid-range product. But at $200 CDN for a 4-card box, I'd at least expect different photos on different insert sets. 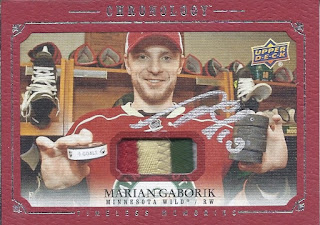 But, I picked up the Wild slot to chase Marian Gaborik cards, and boy did I hit a beauty! This isn't numbered, for some reason, but I really don't care as this has so much to like about it. That's a 4 colour swatch on the card, with just a hint of white keeping it from being all patch. The photo on it is interesting, as it is from Gaborik's 5 goal game. Until I checked the record of 5 goal games, I didn't realize that Gaborik's game was the only one of the decade of the 2000s.  And we've got an on-card autograph using one of the less-common ink colours.
Wow. What a beautiful card! When I do my "best card for my 2/14 collection that was released in the previous calendar year, and that I acquired", this should easily take the top spot. And if doesn't, the card that would take it would have to be amazing. Short of a Richard Hamilton face mask relic, I don't see that happening.
And there you have it! I'll start recapping my 4 hobby boxes of Chronicles next.