Spoiler: None of these boxes were acquired, nor opened on Boxing Day. 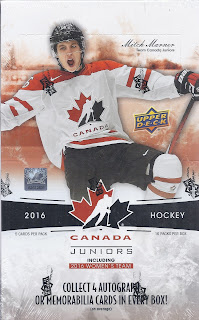 Team Canada starts their defense of their World Juniors Championship later today, so it is the perfect day to head back in time a few years to the 2016 product, which even a few years later isn't too hard to come across. 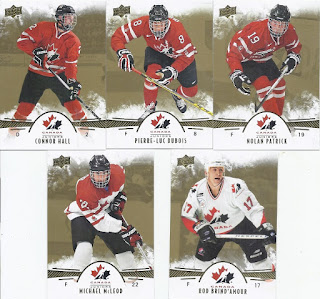 I'm certain I've showed off the base cards before in one of these, so I'm going straight for the hits and inserts. These are the most prevalent parallels, the golds. This grouping is pretty standard for this release - a mix of prospects and some veteran presence. 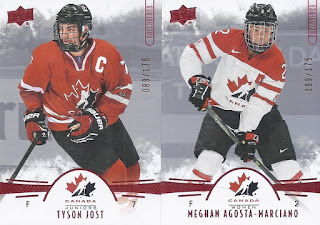 There's also a couple Exclusives per box, all /175. This is the first appearance of a notable card for the ladies portion of the set. 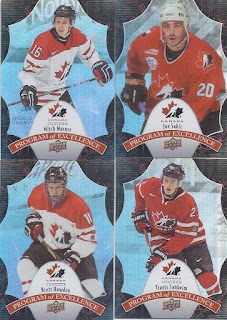 The most common inserts come from the 60-caard Program of Excellence insert set. even though he is a Leaf, the product's cover boy of Mitch Marner is a pretty good grab. 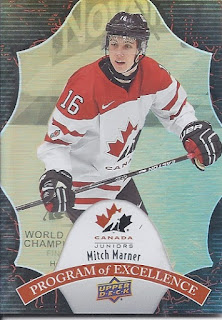 But this is even better. The gold POE parallels fall every third box, so this is probably the big card from the box. 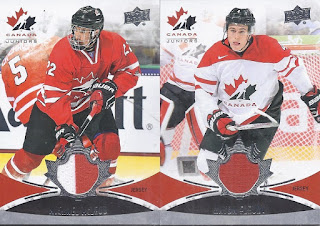 Finally, the hits. First up, we've got a pair of unnumbered relic cards. Foil on black does not scan well at all, so I'll have to reveal these feature Michael McLeod and Haydn Fleury, who are currently in the Devils and Hurricanes systems respectively. 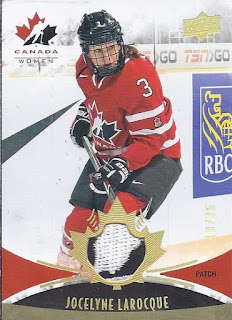 Silver foil might not scan that well, but gold does. Here's a pretty sweet patch from the ladies' side of things. I'm not too sure where it comes from on the jersey, but it is still pretty nice. Jocelyne has an Olympic gold ('14) and silver ('18) to her credit, along with 7 of varied hues from the World Championships. She was also the first indigenous hockey player to represent a woman's team at the Olympics. 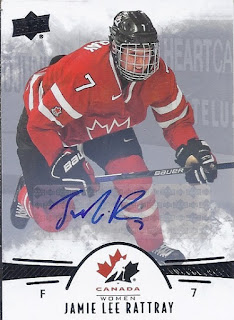 A good box for the women's team, as they were also represented on the autograph! While her résumé isn't quite on par with Jocelyne's, she has a few international appearances to her credit. And I'd rather have an auto of someone who doesn't make a lot of appearances in sets versus a prospect that hasn't reached the NHL yet.
And there you have it!