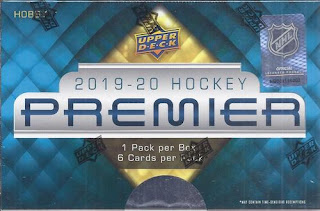 The best cards are free ones, and these were the ones contained in the box of Premier I won in the post break random I mentioned yesterday. 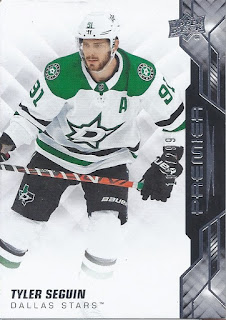 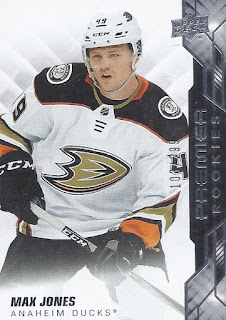 Base card #2. The standard seems to be one veteran and one rookie, so that held through this. 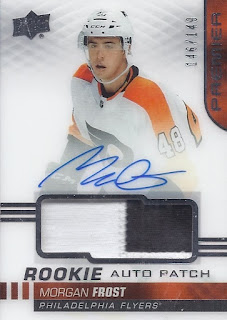 There's also one RPA per box, and here it is. I kinda would have liked to see some orange as part of the swatch, but this is still a decent enough one to land. Even with that minor quibble, it isn't that bad of a pull. Frost spent more time in the AHL last season, and should still retain his rookie status in the upcoming season. 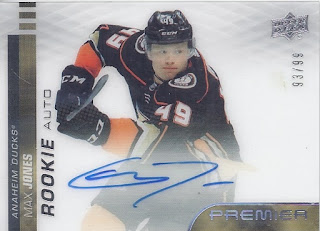 If I didn't get enough Max Jones out of the base appearance, here's one with a signature to accompany it. 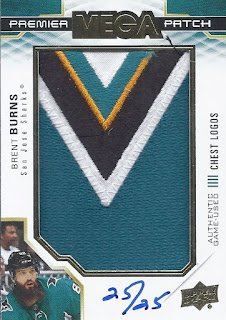 I'm not sure what the big chase cards officially are for this product, but for me, they are these Mega Patch cards. They generally fall at one per case, so I lucked out getting the box that contained it. Given that this is 25/25, and they tend to go in order for the numbering around the patch, it looks like this comes from the lower part of the chest logo. Even if it doesn't feature the shark itself from the logo, it is always nice to be able to match the swatch on a card with the placing on the uniform. 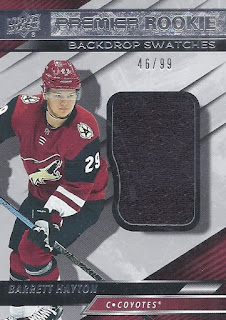 Any relic would pale in comparison to the previous one. Sorry, Barrett Hayton. 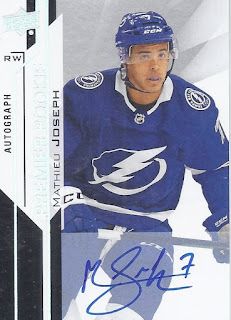 Hey! The box lied! There were 7 cards in it! Even if this is an Update card from 18/19 Premier, this is still one more card than I expected. No complaints about this!
And even if I wasn't too crazy about the content, the box technically didn't cost me anything extra. So any complaints would have come off as being a jerk.
There you have it!
Posted by buckstorecards at 07:21