Montana De La Rosa, that is. 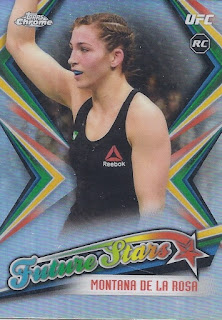 And a rare addition to the ladies among the 2/14 collection. She's also the first UFC fighter in the collection, with the closest one previously being ring girl Natasha Wicks. UFC/MMA has never really appealed to me much, which is surprising for a wrestling fan, but at least now I have at least one name I can look for in the results. 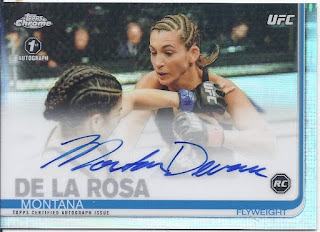 Let's throw in an autograph of her as well. The penmanship is decent, with a nice large signature that uses the provided space well, and it is more than just the initials. She's no Darius Songaila, but is probably still in the upper half in terms of quality.
As for the design, I absolutely love how the 1st, and RC logos are surrounded by an octagon. Simple,. but perfect. 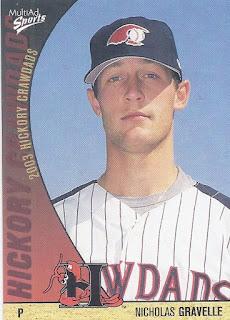 This is a good a time as any to show off some other new faces. Going through tcdb's 2/14 birthday lists, verifying them against other sources, and cross-referencing them with COMC added this minor league card to my collection. It is also my first Hickory Crawdads card in the collection. 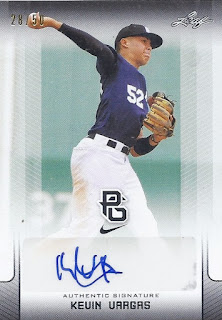 Their listings were also good for adding some prospects to the collection. These Perfect Game cards are released prior to the draft as a showcase set. Vargas' last minor league action was in the Cardinals system. 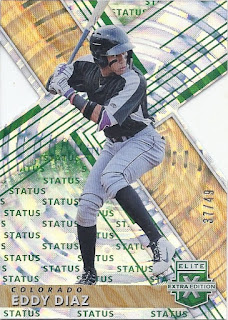 Strangely enough for my purchasing, the least expensive card of Eddy Diaz wasn't one of his base cards from 2019 Panini Elite Extra Edition, but instead was this loud die-cut card of the Rockies prospect. 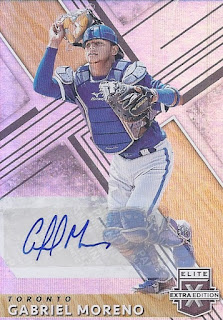 And let's throw in a third prospect as well. Even better, Gabriel Moreno will join the list of players who can fit in more than one of my PCs, since he's a Blue Jays prospect. Since he is listed as Toronto on this card (and his Bowman releases), I guess I can count him as the second Blue Jay in the collection. While there were cheaper options for him, I just decided to shell out a few bucks more and get the autographed version. Because why not?
There you have it! I'll show off cards from more familiar faces to the collection next post.
Posted by buckstorecards at 12:06