While the NBA season has tipped off, iat doesn't really tip-off until the Raptors have played their first game. Which they will do tonight. And that gives me an excuse to show off the Raptors content, however sparse, from my latest COMC shipment. 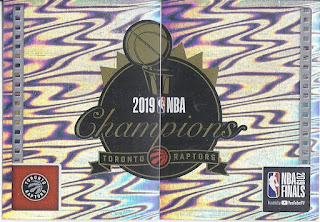 But maybe I should refer to it as my COMS shipment, as I added a pair of them from last year's Panini Sticker release. If I ever decide to decorate my Raptors binders with stickers, these might be the first ones I peel. 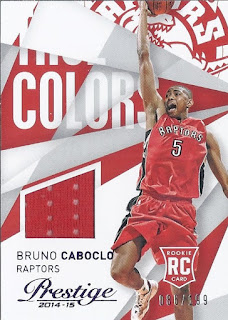 Nothing but hits the rest of the way home. Sometimes, I just look at the cheapest relics and autos available and throw one of those into the inventory. This is one such card. Even though he never really came close to being two years away, Bruno was pretty popular for a back-of-the-bench player. 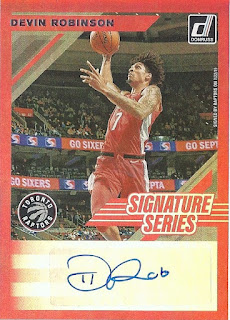 My quest to add at least one card of anybody who got one as a Raptor means I hunted down this Devin Robinson card. Devin never played a regular season game for the team, only some preseason contests. They do a nice job thought of hiding that it isn't really a Raptors uniform in the photo with a perfectly placed hand. And there's no way he'd sport #7 for the team.

If my 'guaranteed one autograph' from a hobby box turned out to be someone who was already off the pictured team by the product's release date, I'd be pissed. But I'll gladly take advantage of this to add an obscure Raptors-graph. 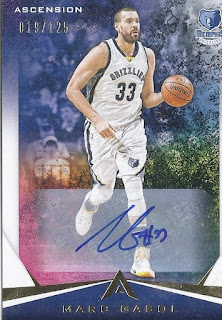 And since it looks highly unlikely that Marc Gasol will get an autograph as a Raptor (at least until his retirement), this will suffice as the Gasol entry in my collection of autographs of the ring recipients in 2019. Also, that should be the last card I need, unless Malcolm Miller or Eric Moreland suddenly shows up in a set.