Christmas seems like the perfect day to clear off the backlog of incoming mail to my address over the past month.

First up, Sal Barry of Puck Junk fame posted that he had some of the numbered portion of 2006 Parkhurst available. Despite only needing one, I took up the offer. 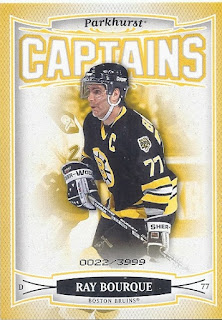 And sent a few of my numbered dupes in return. He also lamented, much like I did, the ghastly collation in this year's Upper Deck Series 1. Fortunately, all my dupes made it possible to do major damage to his wantlist, and all his dupes completed mine. 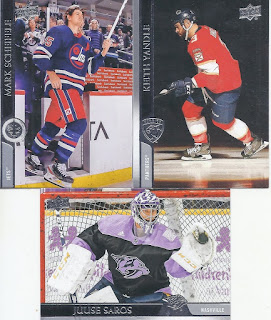 I'm not highlighting everything, but here's my favourites to end the 1-200 portion of this year's set.

Time to go even further back with a trade that originated in this year's O-Pee-Chee release. I busted a quartet of hobby boxes of it, and ended up with far fewer dupes. There was a promotional 9-card puzzle in this year's set, which would lead to a rather limited card of Alexis LaFreniere. Someone over at the Clouts'n'Chara was interested in the 2 pieces I pulled, and we arranged a trade that would do damage to both the base set's SPs, and the playing card insert portion.

Then Canada Post promptly lost the package heading my way. I'm way too patient, as I waited about a month and a half before reporting back, and Sean sent out a replacement package. 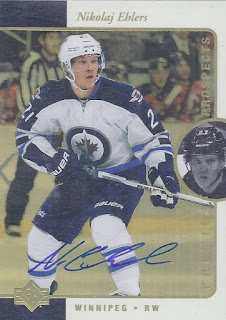 It might not have been OPC set builders, but it did add a couple new autographs to my 2/14 collection. Here'a Retro Rookie auto from 2015 SP Authentic. 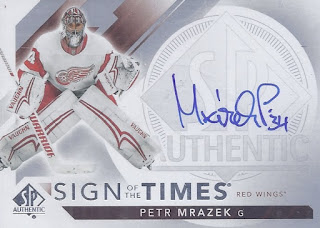 One SPA card deserves another, although this one is from 2017. 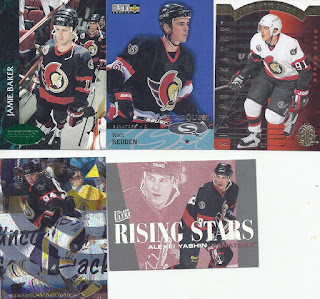 I sent a package to Condition Sensitive at some point in the past, and when the recap of that was posted, I was assured that a return package was already on the way. It arrived a couple days later, and these are among the highlights. I won't show everything, but I will show a nice collection of Sens inserts/parallels.

And 3 of my PCs hit with one grouping of 3 cards. Masks, Bills, and Sens. 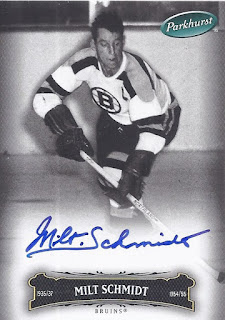 Finally, a TCDB trade. Interest was expressed in a Mike Bossy autograph out of '06 Parkhurst that I pulled from a Dollarama repack ages ago. It wouldn't be easy to get that out of my hands, but an autograph of Milt Schmidt from the same set would certainly be the type of card that would do it. That's my second auto of the local product and Kraut Liner. Blue works so nice as an autograph combined with a black-and-white photo. 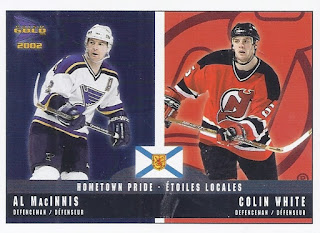 A trade can't stop with one card, so I added in some cards for a Tampa Bay collector, and added this 1/2 Al MacInnis card for my Kitchener Rangers collection. 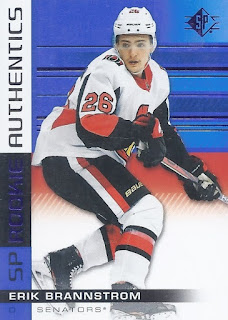 Let's add a nice Senators card as well!
And there's my mailbag for December! Tomorrow is Boxing Day - perfect to recap some boxes!