It is Grey Cup weekend, with the CFL championship being contested in Calgary this year. And this year, my beloved Hamilton Tiger-Cats will be playing for the championship against the Winnipeg Blue Bombers. As you read this, I'll be on my way westward for the game, and am going to use this weekend to highlight some of the related cards in my COMC to-be-posted box. 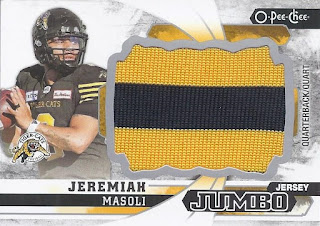 It is rare that e-packs through with a perfect card for the collection. And then I remembered last year I bought a box of the e-pack product Compendium last year on a Black Friday whim, only to get a printing plate of 2/14 baby Petr Mrazek. So I shouldn't be surprised that on another whim, I get another card that hits a PC, this sweet jumbo jersey relic of Jeremiah Masoli. Getting Ti-Cat stripes on this huge swatch? Even better! Unfortunately for Masoli, he got injured part way through the season while on his way to an outstanding year and won't be on the field Sunday. 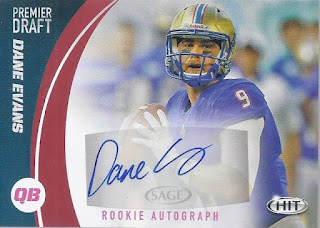 But Dane Evans will be. He took over at QB after the injury, and after a few early hiccups, settled in perfectly to the position, leading the team to finish with a 15-3 record during the regular season. The interesting thing about this photo is that it kinda looks like he's wearing the colours of his Sunday opponent of Winnipeg, but he's actually sporting his NCAA Tulsa Golden Hurricane colours. He's probably played his way into the #1 position going into next season, unfortunately for Masoli. 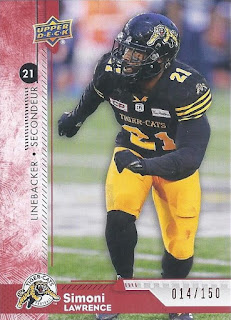 While it isn't as great as the swatch, this is another pretty nice card off of the CFL epacks, from last year's release. Simoni is the Eastern nominee for Most Outstanding Defensive Player, after leading the league in tackles with 98. That's despite being suspended for two games. By the time you read this, he may already have won the award, which is being announced on Thursday night.

And there you have it! Some boxes are set to break over the weekend.
Posted by buckstorecards at 05:08