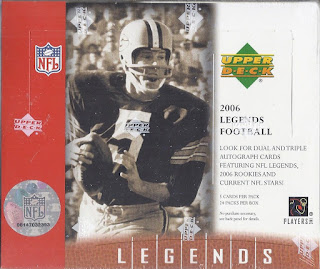 This was the second of two low-priced boxes I picked up via blowout so far during Black November. I was a little worried about this at first, but since all the autos looked to be of the sticker variety, I wasn't too worried about a long-expired redemption showing up. 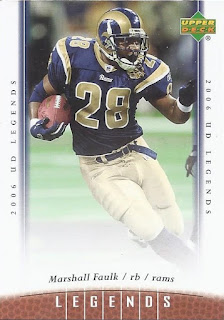 But first, the base cards. Maybe a little too much border, but a nice clean design. And I do like the football pattern on the bottom. There's a mix of mainly retired stars, with a few current stars among the 100 card base. Faulk would be the latter, although he was close to retirement at the time. 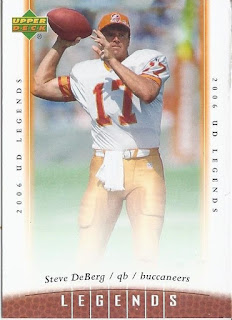 Other than the player featured, there's nothing to distinguish between the two on the design. 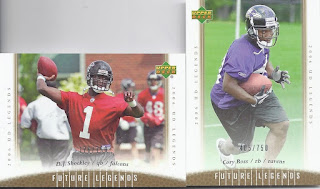 Sorta like Rookies and Stars, 101-200 in the set consists of rookies, SPd to 750 each. I only landed these two in the box, and while a nice little bonus, they really seem out of place in this set. 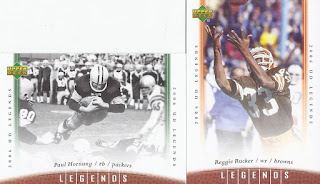 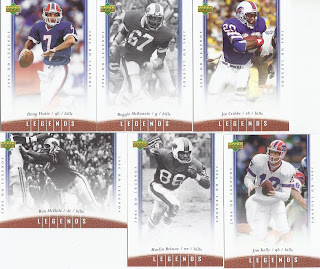 The Bills earned a disproportionate 6 cards in the legends portion of the base set. No complaints here! 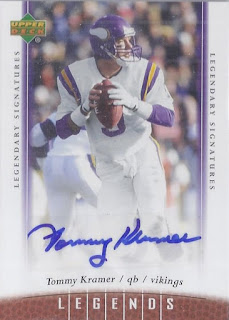 Let's start with the autographs! The great thing about this is that the set is filled with people who rarely get autographs in products these days. Or ever. Kramer is getting a little bump in publicity this past week after the Vikings 20 point comeback against Denver, having QBd them to a team record 24 against Cleveland. 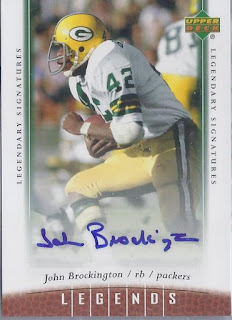 PACKERS! WOO! PACKERS WON! Since he wasn't on a SB winning team, I cannot fully break out the MST3K clip for this, although Brockington is in the Packers Hall of Fame. Just like with Kramer, neither one has made an appearance in a major release since this card. 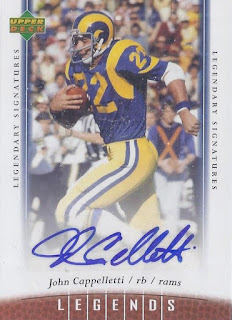 This is actually pretty cool for me to pull. I've considered 'Something for Joey' to be one of those movies it is acceptable for a man to cry while watching and still be considered manly. While a Penn State card would probably be better for that, this is still a nice addition to my misc. football hits collection, especially considering that it is one I wouldn't necessarily add to my collection as a single purchase. 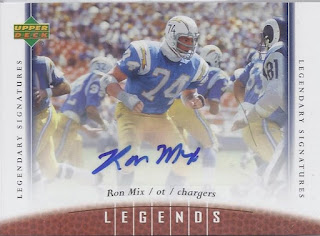 Good news: Bonus auto!
Bad news: It probably replaced the card that I would have needed to complete the 1-100 base set.

But it is an OL line guy auto, which are rare to see, and it features the classic, and amazing Chargers uniforms. So that's a pretty nice way to offset not finishing the set.

There you have it!
Posted by buckstorecards at 06:25