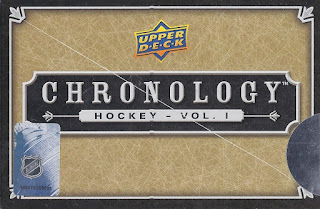 Although I'd been in a group break of Chronology before, I really didn't land any notable cards (at least for myself) in those that were worthy of a solo posting. 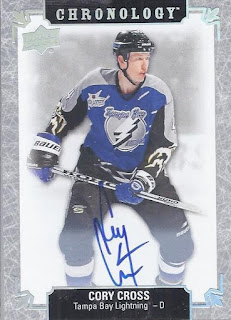 Although I could have used this Cory Cross auto for a Uniforms of the Damned post.

The box promises a base card, two autographs and an extra card, so let's see what was within. With a cheaper price at the show, as well as the bonus pack, I'll give this box a shot. 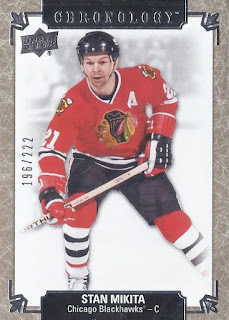 This has a very nice design for the base, one that if the cards were thicker, wouldn't seem out of place in The Cup. 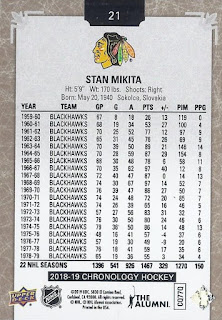 You don't necessarily get full stats on the back, but you do get 20 seasons worth. 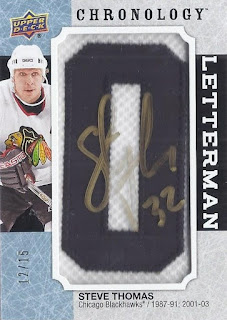 Continuing the Blackhawks theme of the box, here's the second card, and it is a pretty nice one. The name plate is a manufactured one, but it does give a major chase portion for someone that wants a pretty unique collectible. I guess (hope) that the numbering portion means 15 for each letter as opposed to 15 total, to at least give people a fighting chance. 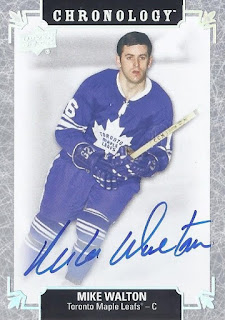 This is the more common style of auto. The great thing about the set is the auto portion is loaded with people who haven't made appearances in products with hits in years, if ever. 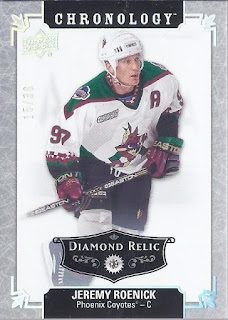 Two autographs down, so here's the bonus card. 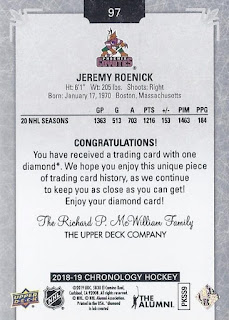 If I had a choice between a plain white swatch, or a lab-produced diamond, I think I'd choose the latter. Plus, if I ever woo someone whose favourite player was Jeremy Roenick, and their favourite Roenick era was his Coyotes run,  I'd have the perfect item to propose with!

And here's the bonus pack. Appropriate that one of them is a chronology card for the box. That Makar isn't bad either.

There you have it!
Posted by buckstorecards at 06:19