I had a chance to get into a not-too-expensive case break of 2015 SP Game Used. There's a chance at a nice McDavid, so why not? I didn't get the Oilers spot in the random, but did get the Kings and the Jets. And each of those two spots landed me two relics each. 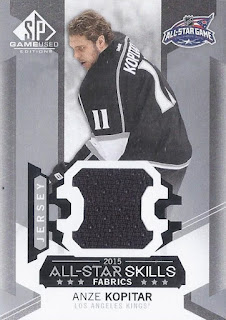 If I had to pick a dullest card in the bunch, this would probably be it. Just a simple one colour swatch from the All-Star weekend. At least it can be traced to a specific event. 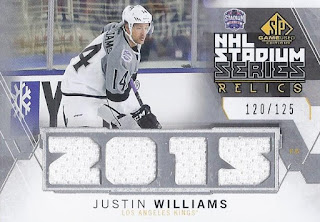 This can also be traced to a specific event, but it is an actual game. And this photo obviously features the jersey in question that was used for the card. That's if the disclaimer on the back is accurate, at least. 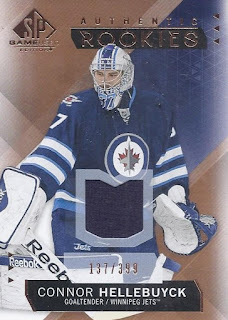 While I didn't land the Jets, I did land a Connor card. 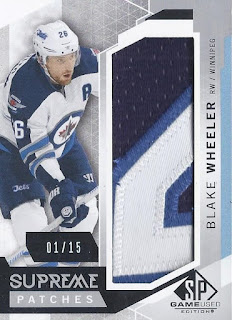 And while I didn't land a card of the biggest name in the break, I probably did land the nicest swatch of those in the break. You can tell where it is supposed to come from on the jersey, if only Wheeler had turned just a little bit more you could see the full number on the shoulder of the jersey. But if that is my greatest criticism about the card, that's a great one to have.  What a keeper!

There you have it.
Posted by buckstorecards at 03:07