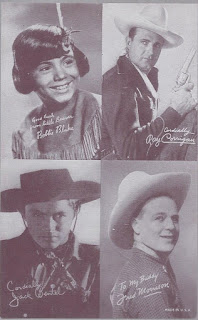 Sometimes, when someone doesn't have a lot of cardboard representation, you have to get a little weird when it comes to adding them to the 2.14 collection. So, I dip into something with a Western feel and something called 1938 Exhibit Movie Stars 4-on-1. It the upper right cormer, with the gun and white hat is Ray 'Crash' Corrigan, While this is a Western themed card, I know him far more for his appearance in the Undersea Kingdom serials that were riffed during Season 4 of MST3K. I believe he's the third riffed actor to appear in my collection, behind Lois Maxwell (Agent Double 007) and Edward Platt (The Rebel Set).

Hey! It's the Undersea Kingdom, for you and for me! Where the men are in dresses..

And yup, that's future Baretta/murder defendant Robert Blake as Little Beaver in the upper corner. He didn't start that recurring role until the mid 40s, so I can't really call this a 1939 release.  But here's the newest face, in luxurious black & white, in the collection!
Posted by buckstorecards at 04:21

Email ThisBlogThis!Share to TwitterShare to FacebookShare to Pinterest
Labels: 2/14, Hollywood