I jumped into a team select break of Upper Deck's new Artifacts release, grabbing the Canadiens. They've got an interesting item on the checklist I thought was worth the chase: Arena Artifacts. Those are literally artifacts from an arena, containing a piece of either a brick or seat from the Montreal Forum.

They're very much SPd, and I didn't get one. But I still got some nice cards to show off.

These were the three base cards. one of whom is no longer a Hab. But this should be Pacioretty's last card in Montreal colours. 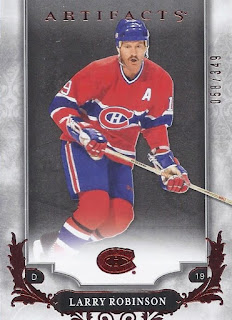 Strangely, I got none of the high numbered base cards for the team, but I did get this high numbered parallel of Larry Robinson. This is a nice addition to the Kitchener Rangers alum collection. 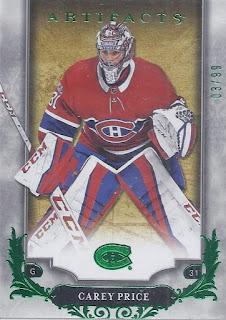 And a numbered card for my mask binder as well. 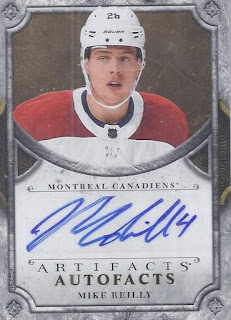 The Autofacts insert set tends to be sticker-dumpy, but a hit is a hit. And at least he's still with the team he's pictured on. 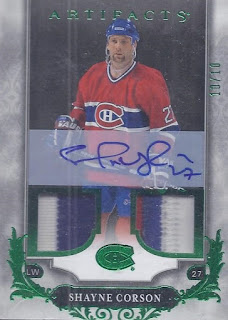 The big hit for me, though, was sort of unexpected. Shayne Corson hadn't been in many releases of late, despite being somewhat of a mainstay of releases throughout and beyond the 90s. He made appearances in recent Team Canada and Leafs Centennial releases, but this is his first Montreal hit in a bit, Combine it with a nice pair of swatches, including one of bleu, blanc et rouge, and this is a really nice looking card for someone who collected in the time of junk wax.

While I didn't get a piece of the Forum, I have no complaints about the results of this break on the whole.
Posted by buckstorecards at 09:18