Unsurprisingly, I was unable to resist the urge to pick up some more 2018 Heritage Minors, and cashed in some COMC credit and got a couple boxes from Blowout. But since I still had money left over, I needed some stuff to go with it. I got one box of '18 Chronicles, and this: 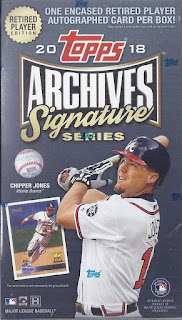 This is exactly as it says on the package. One encased autograph. Although this is encased in the sense of 'in a magnetic with a sticker' as opposed to graded/encased.

What did I land? 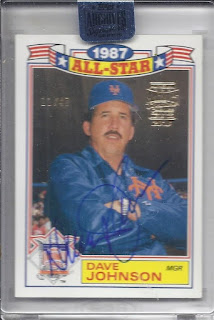 WOO-HOO! A Mets card! Even better, it is an autograph of a Met that I didn't have previously! Let's free this from the plastic prison (It will look better in my Mets binder anyhow), and get a better look. 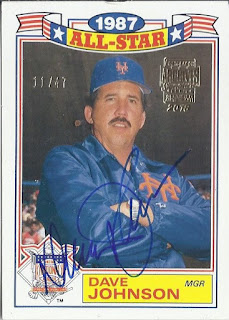 Much better. This was one of the glossy inserts that you'd find in rack packs back in the day. This can be connected to the World Series winning team, since it commemorates the 1987 All-Star game, in which Johnson was the manager based on his team being in the 1986 World Series.

Nothing beats hitting a keeper from a one-card product!
Posted by buckstorecards at 08:30