A Spectra of Bills

I've done two Bills posts on Sunday mornings since the start of the season, and those were the only two games they've won so far this season. Will I go 3-for-3, or will Derek Anderson make me pine for Peterman? Either way, let's see a couple Bills cards from a half-case break of the new Spectra release. 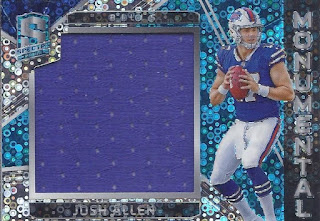 That's a very colourful start to the results. Team colours in the parallel and a giant blue swatch. Josh has been a typical rookie with some moments of glory and some moments of not-so-glory, but I'm at least willing to give him a chance. How about an autograph to go with this? 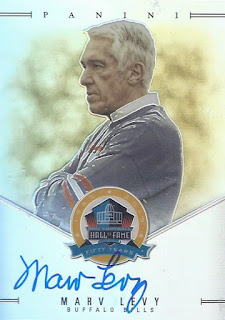 Yes. This will definitely be a nice addition to the ol' Bills team collection. While there are plenty of autographs out there of players from that era, there aren't too many of Marv. I was happier to see this one come out of the packs than I'd be about any auto from one of the current rookie class. These are part of the 50th Anniversary HOF subset that was actually port of the 2013 release of Spectra. For whatever reason, some weren't included then, and sat on the shelves at Panini's warehouse until now. I don't quite card about the reasoning, but I'm elated that this finally made it out and into one of those group break boxes. And a nice signature for someone who was (depending on when he autographed it) in his late 80s/early 90s at the time.

And there you have it!
Posted by buckstorecards at 08:12