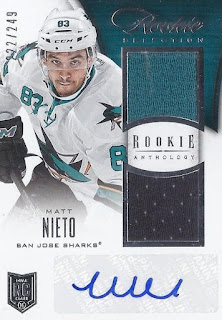 The base card, as usual, starts this off. I don't really think I can parse "Matt Nieto" out of that autograph. However, at least he's still in the league, with him currently playing for the Avalanche. 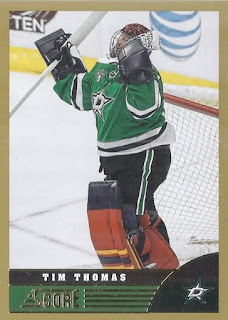 Usually, this is where I show off the Score Update base cards. However, this time I messed up and deleted the scan I uploaded them. So, you get this parallel of Tim Thomas instead, and my vague recollection that they included Jagr, Maatta and McKinnon. 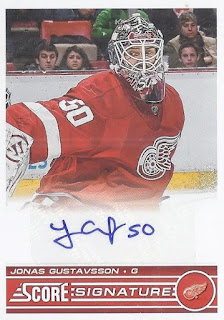 That's definitely a monster of a card for the Score Signatures auto, almost literally as that was Gustavsson's nickname. He's returned to playing in Europe recently after short stints in Edmonton and Boston. 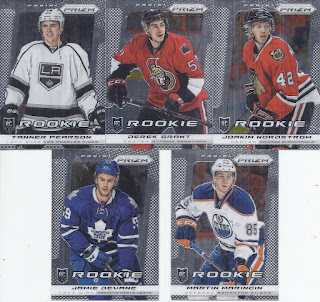 Collation was strange in this, as there were more Prizm Update cards than usual, but no Selects. This was the second straight box I landed a Derek Grant base card in. 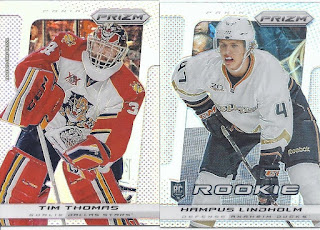 A pair of shiny Prizms. 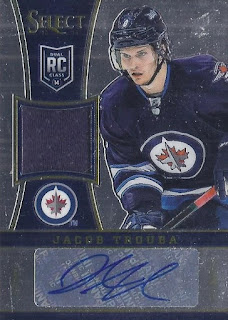 At least I did get one Select card, and it had an auto and a swatch attached to it. i have picked up a different Trouba auto/relic on ebay to make it up to Dennis @ Too Many Manninghams for keeping this one. 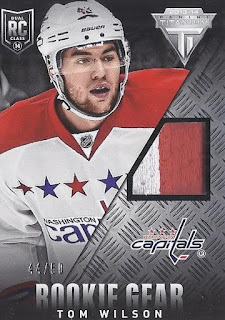 It will be a while before Wilson can provide jerseys for future relic cards. 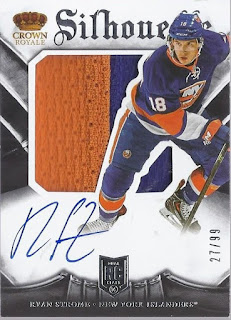 Going to back-to-back boxes with Ryan Strome hits, but this one does rank about the Rookie Selection aesthetically, as the Silhouettes are one of the better designs Panini produces. The RST auto does look a little more obvious with the on-card auto than the sticker.

And there you have it! 6 more boxes left. Maybe I'll finish posting this case's goodies by month's end!
Posted by buckstorecards at 04:36