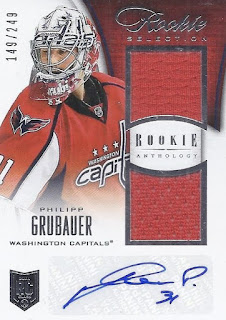 Here's the base card. Grubauer was the back-up on the Capitals run to the Stanley Cup last year, and was moved to Colorado in the off-season. Still in the league? That's all I ask for. 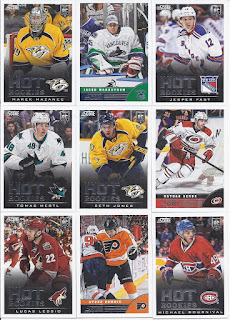 Your Score base cards. Collation is such that I think every time I've found a Seth Jones card, the Hertl has also been in the box. 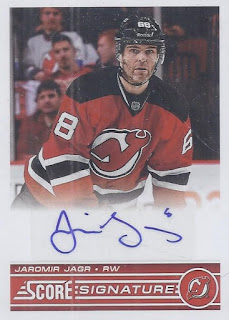 Speaking of cards I've found a lot of, this is the third time I've gotten this from boxes of 2013 Anthology. If I'm going to triple up for autos, getting a Jagr autograph is a pretty good one to do so with. This card is on a list I saw of SPs, limited to 75-100 copies, so I've really beat the odds getting 3 copies of this, but no other cards from the SP list. 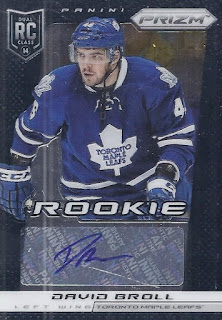 After Jagr, it is really going to be hard for anything to compete in terms of hits. The extent of his NHL experience has been 5 games during the 13-14 season, but he's still active, and is listed as being with the Bruins system now. 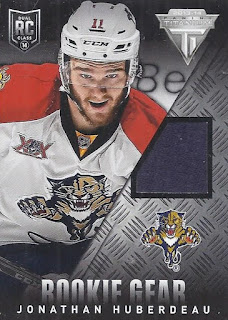 He was a previous Rookie of the Year, and a future teammate of Jaromir's, but that's still not going to surpass the Jagr. 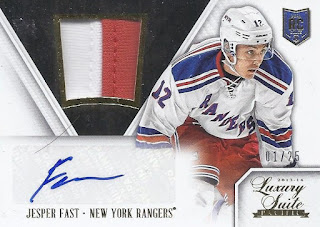 Even throwing in a patch swatch won't do it. At least this one was live, albeit a sticker. The Dominion redemption one should be on the way shortly, though.

Patch and swatch are words that seem like they should rhyme, but they don't. Makes you think, don't it? And no, I didn't partake in any perfectly legal cannabis yesterday. Just something interesting about pronunciation. Right?