It has only been about 6-7 weeks since these cards arrived. I might as well show off the cards from the various group breaks from there. 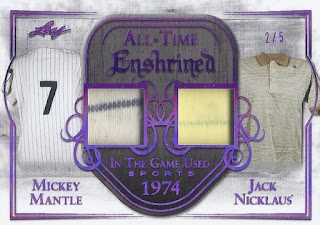 I guess I'm starting with the big one from the breaks. There was a random hit break of 2018 Leaf In the Game Used. The randomizer liked me, and I ended up with these dual swatches. The swatch of the grandfather of a former Buffalo Bill is nice, but even better when paired with that Mantle swatch. Throw in a pinstripe and some stadium filth, and its a keeper! 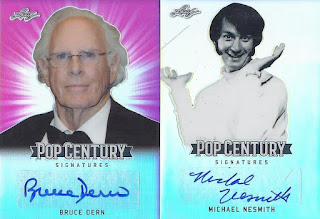 Another Leaf break of Pop Century, which is basically a bunch of random autographs. That's an interesting pairing of a Monkee and Bruce Dern. There's another couple keepers. Before I return to some sports products, savour a Dern cameo on CSI: New York.
Now, a quick baseball showcase. 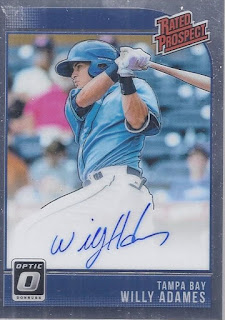 Very quick. One card worth. I only landed a single hit out of a break of Optic, but at least it is an on-card autograph of a decent prospect. A shame he's playing for Tampa, where any success will probably be in anonymity. 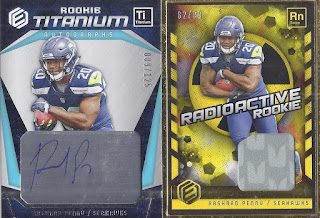 I tried a random case of Elements, and became a Rashaad Penny super collector in the process. I'm probably happier about the relic card, since I've wanted one of those Seattle Seahawks cards with the patterned patches for a bit. 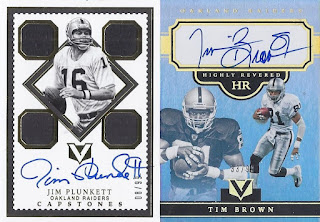 The big winner from Panini breaks for me was the Vertex case, with a pair of autographs from a pair of legends. Both on-card, and both with some gorgeous penmanship. The Capstones/Cornerstones design is a beautiful way to combine the two, and I imagine the diamond pattern would look great on a licensed baseball product.  And then there's a HOFer autograph! That's another great design, and I love that they used different colours for the uniforms in the two photos.

And there you go! I'm still waiting for a redemption on one more card (Harry Giles Spectra) but that will have to be shown off on Condition Sensitive's blog.

But there you have it!
Posted by buckstorecards at 11:19