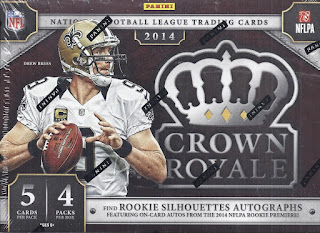 And now, the first box with packs that I dug into. 4 packs, each containing a hit. So, not a lot of extras in this one. With one box containing 500ish cards, I wanted the other wax portion not to be to filling. And here it is! 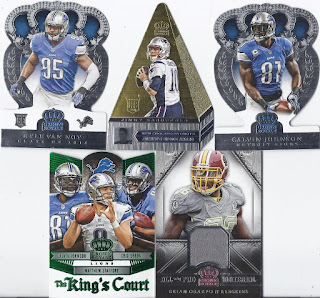 And that is the very definition of a particular team being featured in a hot pack. Tom @ the Angels in Order is a Garoppolo super-collector, so that will be PWE'd in that direction at some point. And the hit is pretty interesting - I like Pro Bowl relics for the uniqueness factor, since you know which game the relic comes from. 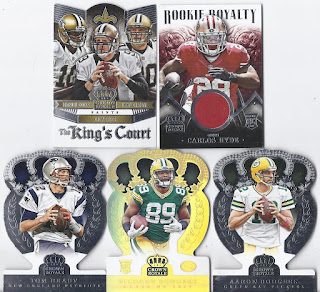 And here's the other relic. And another card bound for elsewhere with the Brady. The shinier of the two Rodgers is a gold holofoil parallel /25. Normally, at this point I'd link to the PACKERS! PACKERS WON THE SUPER BOWL! video, but that will come later. 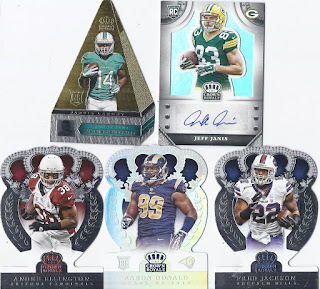 This is where I'll link to it:
Since there's a Packers hit in the pack. But, since I already have a Janis-graph courtesy of random group break late last year, that's likely bound for my COMC account. But, a new Bills base card will be staying here, as will a nice shiny /199 of last year Defensive ROY. 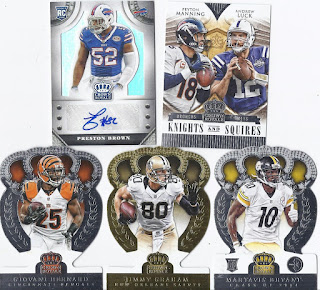 And my favourite card of the break comes out here with a Bills autograph. I've got one of his as well, but I can't have too many Bills-graphs. Manning and Luck are an appropriate combo for a Knights/Squires themed card. The Jimmy Graham /99 is the parallel in this.

So, definitely not a good book value base, but some keepers make it not so bad. And it was credit anyhow as opposed to cash.
Posted by buckstorecards at 08:36