Another pile of credit from COMC turns into credit from Blowout, and as before Stripes helps with the unpacking! 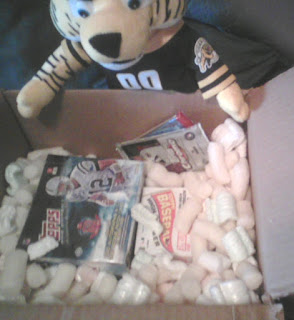 Box #1: 2015 Topps Football Jumbo - It is one of my favourite set builds of the year! Nice to do some damage to it via COMC/Blowout credit.
Box #2: 2014 Topps Heritage High Number Baseball Complete Set - I thought I'd pass on this, since I didn't want to pay full price for this when it dropped. But getting it less than half of that seems like a nice way to wrap up one of my favourite designs.

Now we get into the random other boxes portion of this to round things out. Last time, I went for a base heavy Panini Basketball from 12-13 and an insert only Panini Innovation. This time, I opted for something in the middle.

Box #3: 2012/13 Panini Crusade Basketball Hobby Box - I like the Crusade cards, and figured I'd go for this as opposed to the next year, which had more Crusades, but fewer hits. And I've already got a bunch of Raptors from that year anyhow. So, more chase cards in the older product.
Box #4: 2014 Panini Crown Royale Football - Die-cut base cards? Why not?

1 pack of 2015 Topps Chrome Jumbo - Just because I knew this particular type of pack wouldn't be on the shelves at the LCS.
1 pack of 12-13 Marquee. I was just under $250, and if I reached that level I could save $10, so I added one hobby pack to get that level, so the pack ended up being free, with a few more dollars off the cost before shipping.

So, not as much in terms of pack busting this time, since there are only 10 packs in the jumbo box, but the total volume of cards should be around the same but I'm really looking forward to digging in.
Posted by buckstorecards at 11:33