I'll try any type of repack at least once, as long as I don't break the bank doing so. 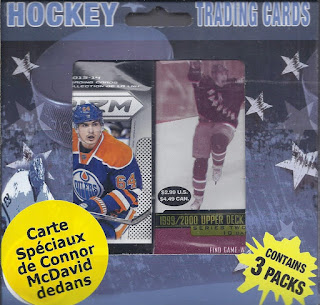 And this one definitely didn't. 3 packs and a carte spéciaux de Connor McDavid! And it didn't break the bank. You can see 2 of the packs, the 3rd was a Score 2013-14 pack. Also, there was a 4th in there as well, a pulsar red three pack, one that was included in target 3 pack hangers, was also in there. So, 4 packs was a better description.

Let's start with my Carte Spéciaux! 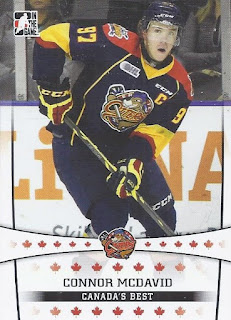 Well, I'm somewhat surprised by this. I was expecting some sort of unlicensed crapola, but it is a nice ITG card with visible OHL logos. And the Erie Otters logo is far more badass than you would expect any team called the Otters. 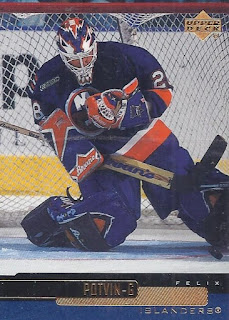 The 1999-00 pack was nothing but base cards. With UD, that can be a good thing, but 99-00 was a really dull year for photography in the flagship set. Excepting the Roman Turek, there is little memorable about the base cards in the set. But at least I can add this card to my masks binder. 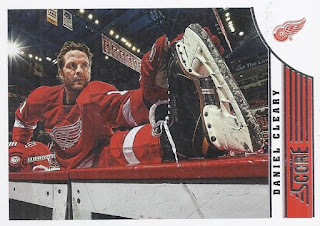 Nothing that memorable in the Score pack either. But at least there was one keeper on the basis of it being a really great photo (and the ideal use of a horizontal layout). 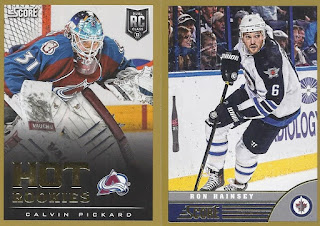 And there were a pair of gold parallels. Nice abominable snowman on Pickard's mask. I should have tired of that motif on Colorado masks by now, but I do like seeing different takes on the beast. 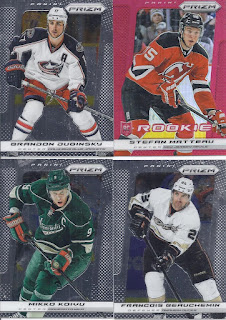 I guess this was a Target pack at one point, so that explains the red Matteau parallel. I can't hate a pack with a nice shiny card in it.

And the bonus pulsars. I guess these aren't searched, as the Forsberg was a pretty good pull. In fact, I added it to the COMC submission I mailed out this morning. The only one there is going for more than I paid for the repack itself, so that's nice.