2014 Adventures in Repacks: Part 40: Another candidate for best repack pull

Yup. The repack gods were very good to me once again. In terms of COMC value, it really wasn't quite at the level of the Bradshaw film strip, but since I'm more hockey than football in terms of a collector, it is a closer battle. 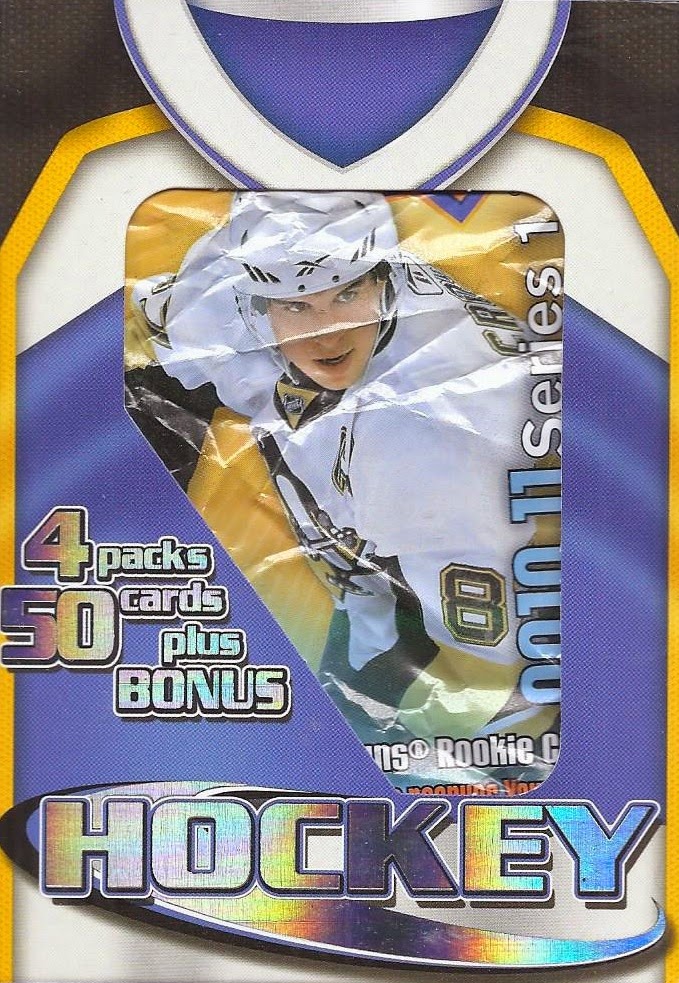 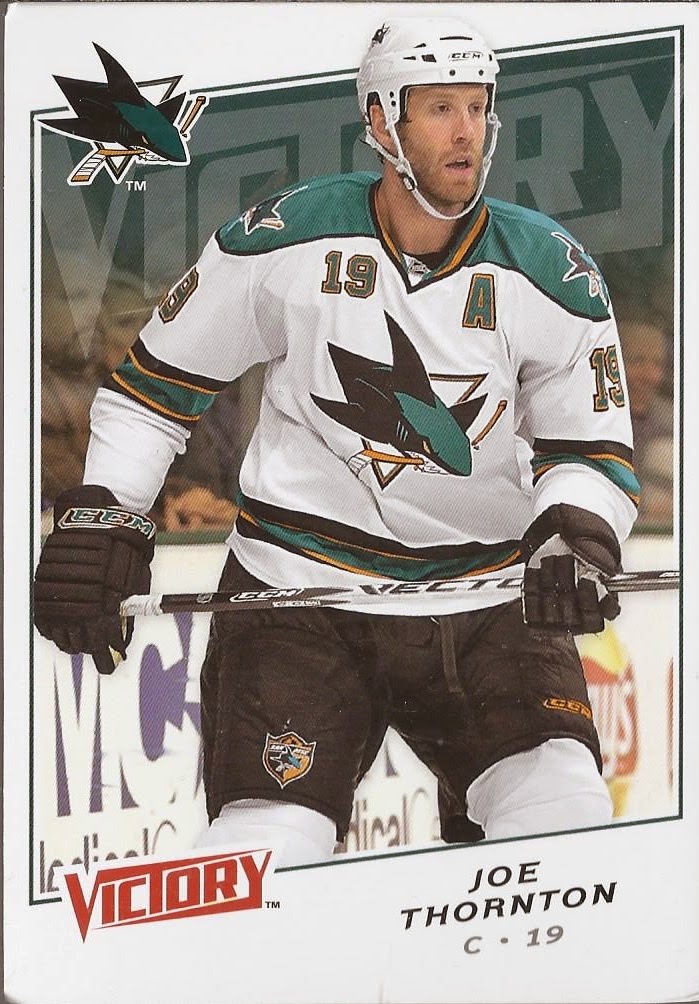 But, I'll lead with the bonus item. It seems like just a base card in the scan, but it is an oversized card. Unfortunately, the packaging has kinda dinged a corner or 4, but I'll probably still include when I send a new package out to Fuji, especially since I do want to send that Matt Tennyson auto at some point. 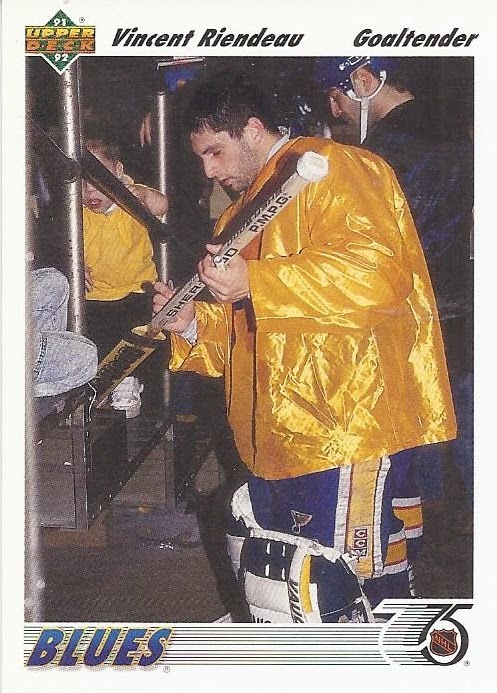 As usual, this meant lots of 1990 Bowman and Score. But, there were still some nice cards in among those. II'm not sure if I like the fact that Riendeau is signing astick in this shot, or that he's wearing a garbage bag. 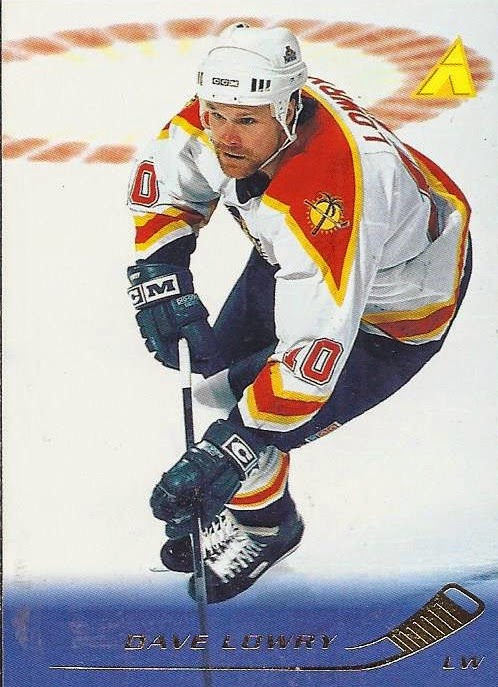 It is hard to dislike it when you get any new cards for the  2-14 collection. Here's a nifty new card of Dave Lowry, with some great contrast in the colours with the design as the blue disappears in the ice. Lucky #13 for cards of his in my collection, moving to 781 overall. 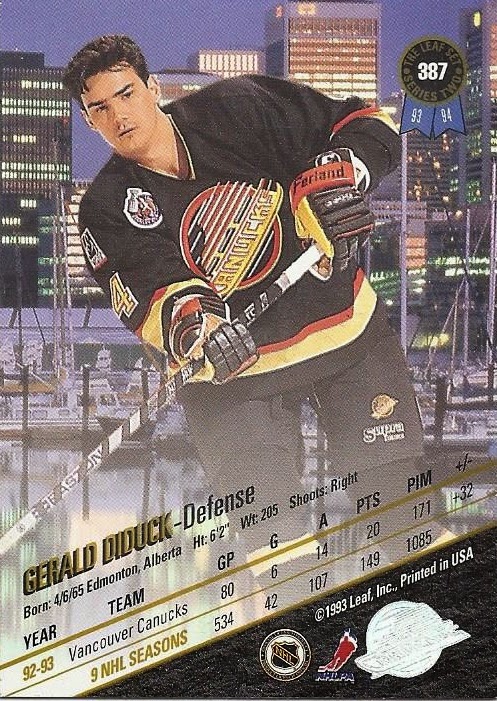 I must post the back of every 1993 Leaf card I come across in a repack. This guy was Diddy before anyone thought of adding P to it. 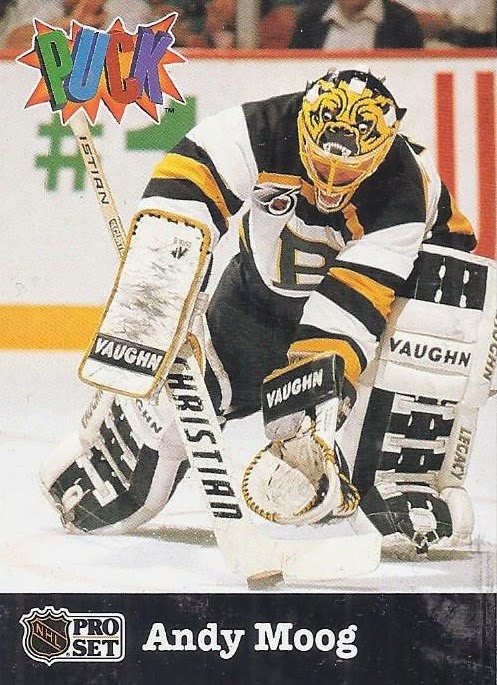 Highlighting a Pro Set card? When you've got a throwback jersey and a mask binder certainty, why not? 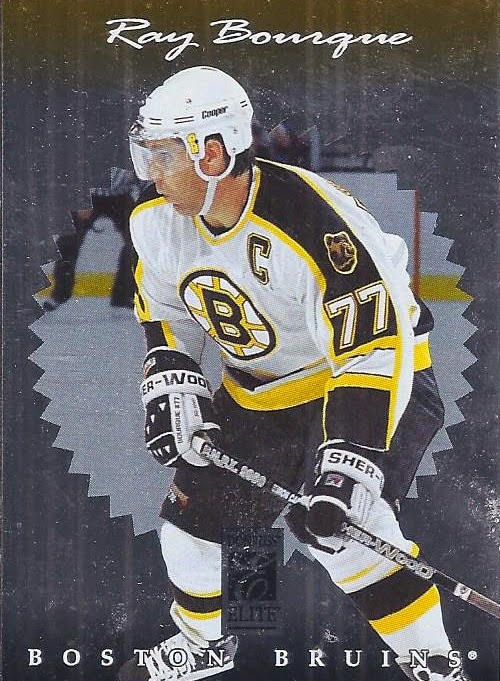 I'm starting to get desperate for anything that isn't from 1990 in this post. So, here's a shiny Ray Bourque from 1996. 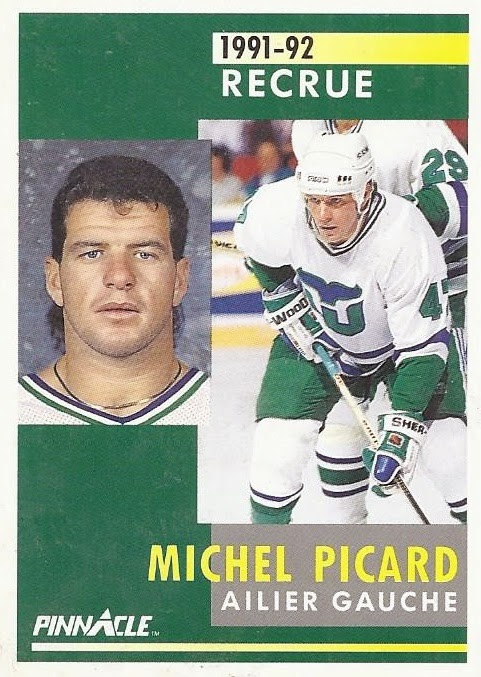 And to wrap up a pretty dull collection of 50 cards, here's a French card of a Hartford Whaler that will probably end up PWEd to Shoebox Legends at some point.

OK. Off to the packs. I'll do these in order of how much I liked the contents thereof. 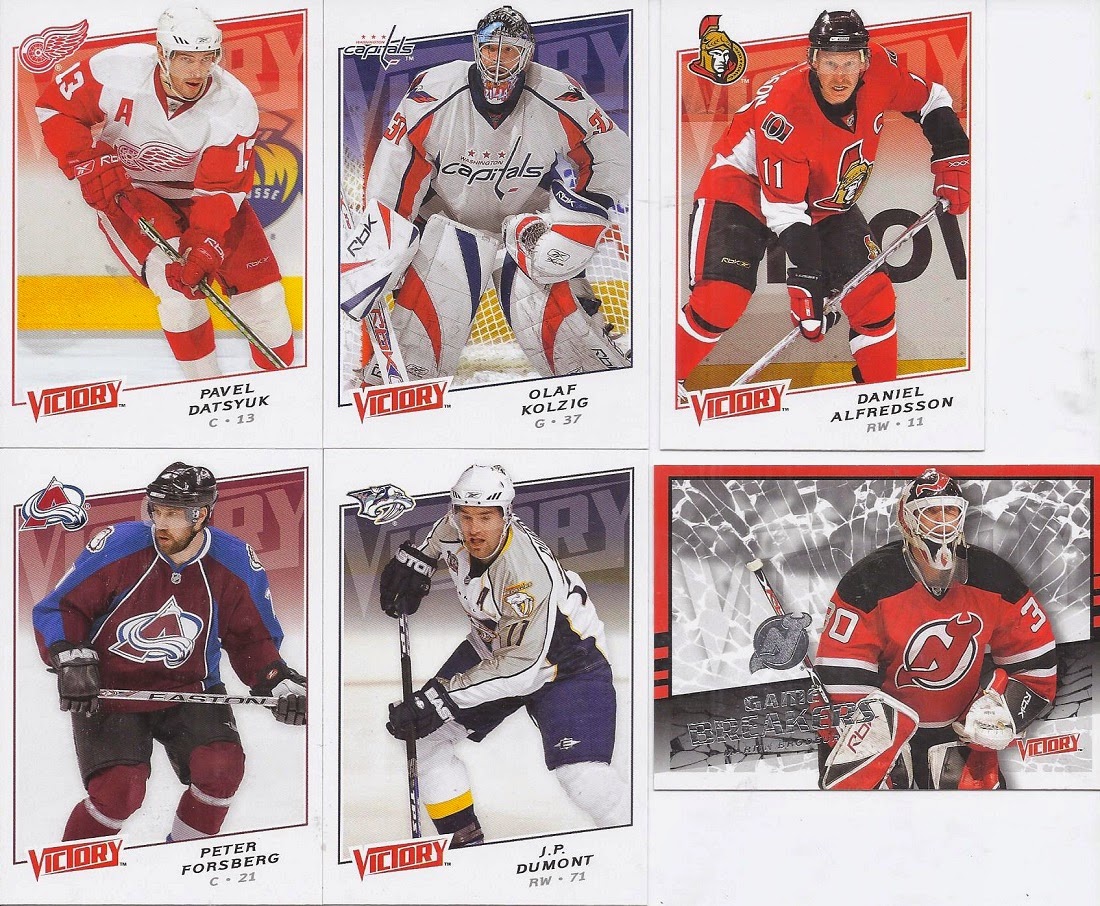 Aside from the Brodeur insert, everything here was a dupe for me. So, I couldn't get excited over a new Alfie or a Kolzig mask. 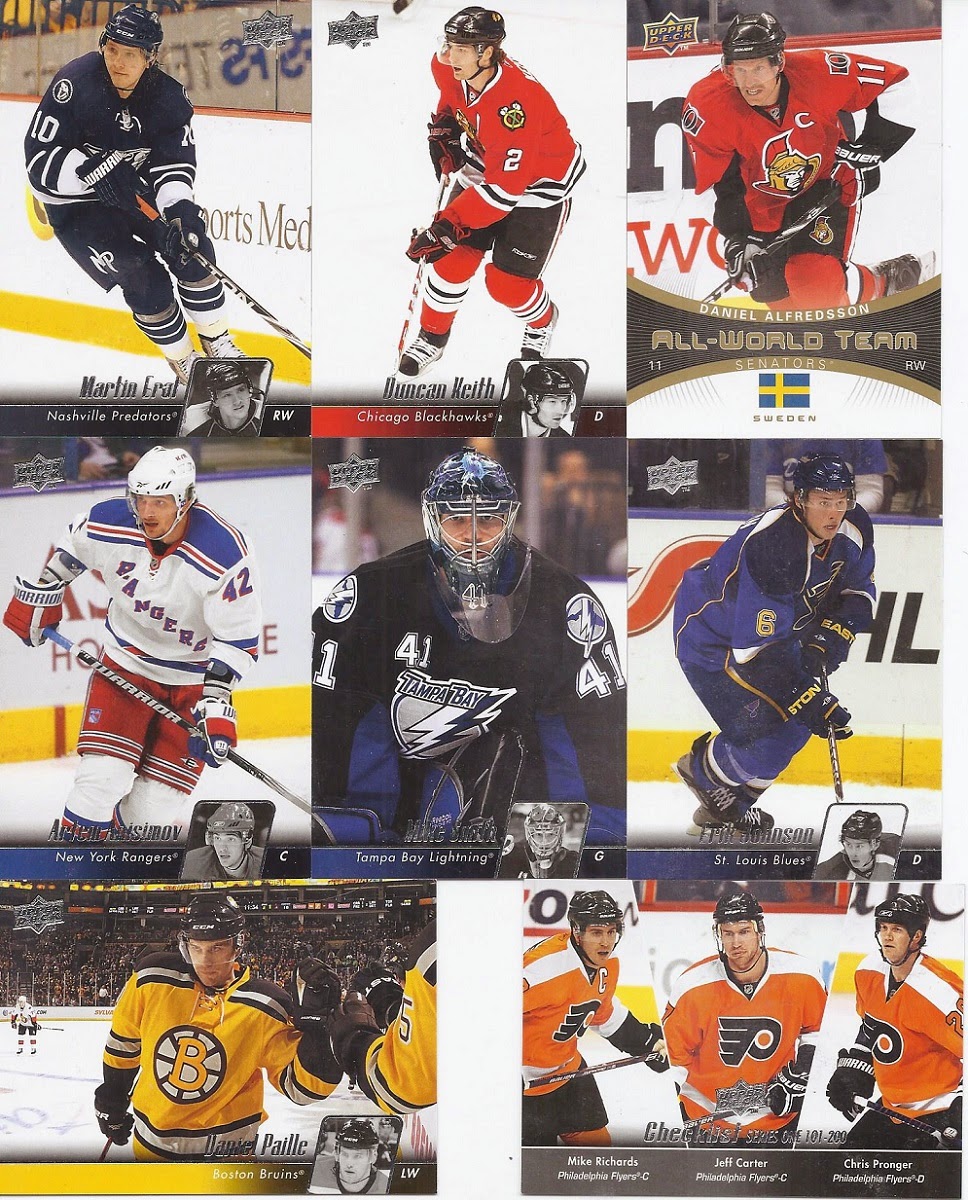 But I definitely needed this Alfredsson insert card for my collection. The Smith though, is a dupe. It is only a third of the card, but I'll still gladly add it ot my Rangers collection, which is starting to become pretty heavy on the Mike Richards content. And we've also got alternate jersey combining with a great photo on the Daniel Paille. A great step up from the first pack. 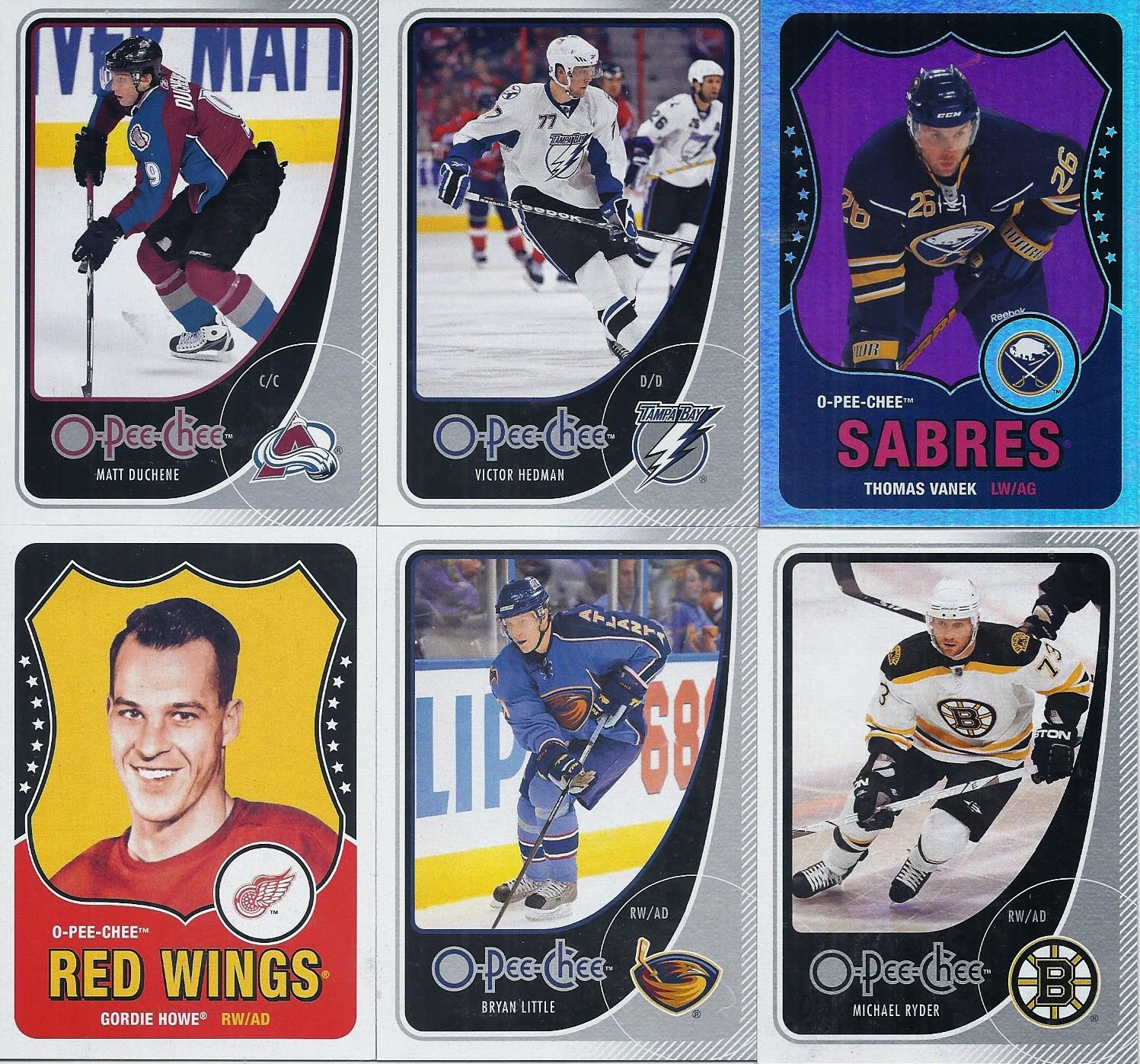 Yeah, I ranked this pack after one that hit a pair of PC needs. But, a retro parallel of Gordie Howe will do that. While it was the same photo used on the base card, it works so much better with a retro themed insert. 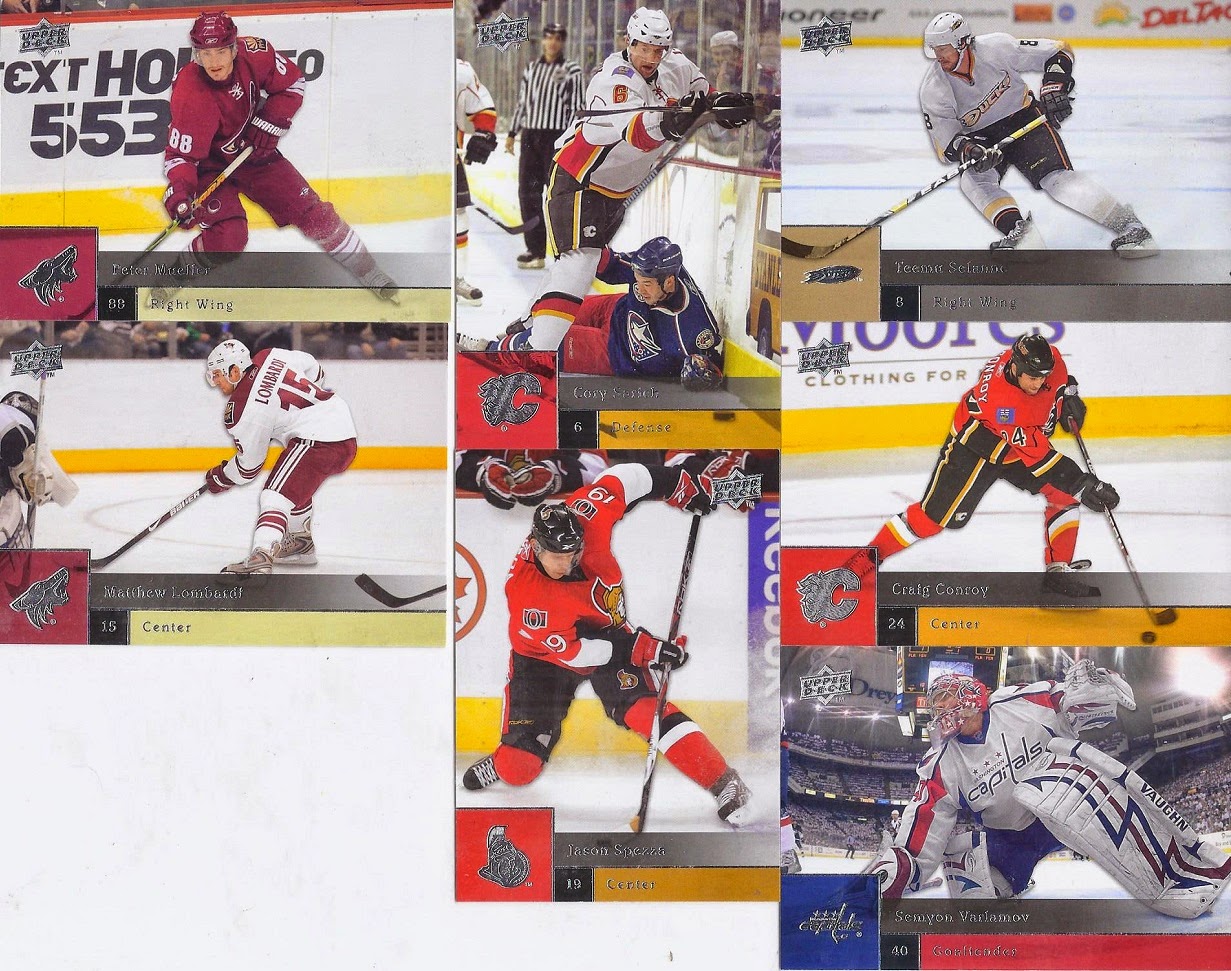 And for the best pack. We've got a Spezza, and a beautiful card of Varlamov highlighting a pack filled with horizontal shots. How can I not vote this one as my favourite?

Oh. It also contained this. 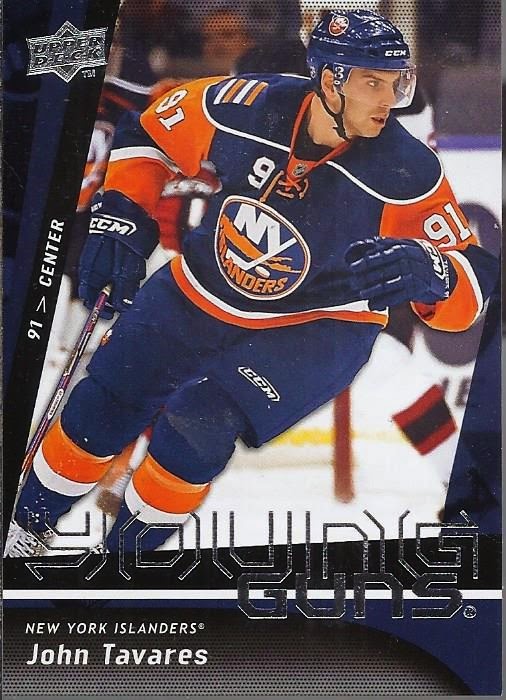 Pretty much the card you want to see come out when you bust a pack of Series 1 09-10 Upper Deck. Actually, Series 1 does contain a really strong contingent of Young Guns, with appearances from Erik Karlsson, Matt Duchene, Antti Niemi, Evander Kane and James van Riemsdyk. So, busting one of these can get you a pretty nice card. And while I would rather have the Karlsson for my PC, it is nice to pull a keeper.

Interestingly, this pack was obviously rustled by someone on the hunt for a relic. To that anonymous pack searcher, whereever you may be - HA HA!

Posted by buckstorecards at 14:46