Since the season will wrap up before the next Monday, this probably the last official week for Masked Mondays until the 2013-14 season gets underway.

So, to keep with a dollar store theme, I picked up a surprise box on the weekend that happened to contain a 4 card goalie pack. Let's wrap up the masks for the season with these 4 cards. 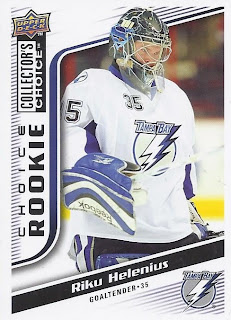 I've posted Riku before on MM, but this time I get to feature the other side of his mask. He's still in the Tampa system as of this past season, but his only appearance in the bigs was a relief appearance. 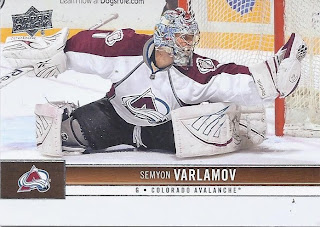 I'm certain I've posted this card before, albeit not for a MM. Surprising to see such a quick turnaround for getting this year's product into repacks. 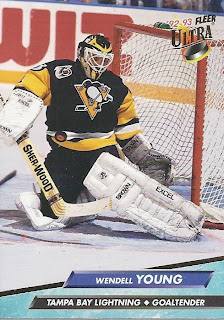 It was a Lightning and Avas hot repack, although the jersey didn't always match the team name, or vice versa. Wendell also fits into my collection as a Kitchener Rangers alumni, playing with their great teams of the early 80s. He's also probably the best goalie to come through Kitchener. At least until we see how John Gibson pans out for the Ducks. 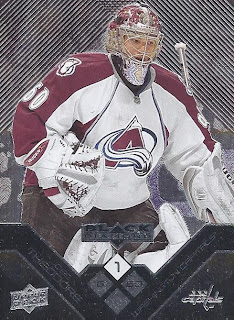 And to continue the Avs and Tampa theme, here's Jose Theodore, although he's listed as a Capital.

No Mark Fitzpatrick Bowman card is a good sign for one of these.
Posted by buckstorecards at 18:16