My LCS finally got in Archives boxes yesterday evening, and I went down right away to get my pre-ordered box. I got right to ripping, and came up with some pretty nice cards once everything was opened. It was my favourite base set from last season, mainly because I liked the idea of "If I don't like one base design, wait 50 cards and it will change".

I'll probably get more into things later today or tomorrow by showing some of my favourite pulls, base, hit or otherwise. But this morning, in return for a tasty RAM chip, I'm going to say one good thing and one bad thing about the box.

Good Thing: Collation. It couldn't have been better. 24 packs. 8 cards per. Not a single duplicate in the box. What more could one ask for?

Bad Thing: Re-used photographs. The first one the jumped out at me was the Altuve. The retro uniform card was one of my favourites of the Series 1 flagship. It had to just be a coincidence the photos looked very similar, right? 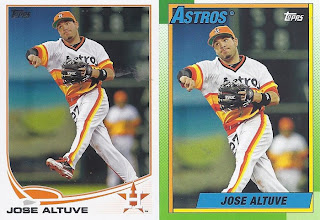 Since the Blue Jays game was starting late out in San Diego, I decided to look to see if any others matched up. 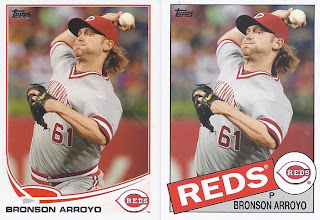 Here's another one from the flagship. 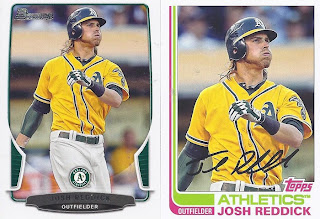 And from the "This is ridiculous" files, here's one that goes back a few weeks to recycle a picture from an earlier set.

When considering only cards I had, and not counting retired players or posed shots, these were the ones I came up with that appear to be recycled photos from sets within the past year.

Ugh. Not good. And that chain link fence on the back of some of the Red Sox set looked awfully familiar from last years Heritage. In fact, the Jon Lester does appear to be the same photo as well.
Posted by buckstorecards at 07:04