Part of being a Bills fan is never to get confident about anything involving the team. Expect the worst! And that requires me to expect them to lose tonight's game. Even if they're up by 17 with less than a minute left in the game, expect a loss.

So, that means this will be my only chance to post Bills cards on a playoff game day. 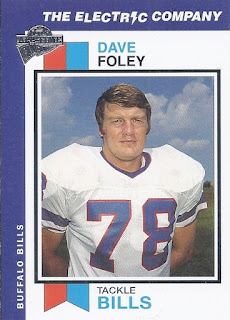 I always enjoyed coming across these Fan Favorites 2004 cards in repacks - why not throw a random Bills one into my latest COMC shipment? 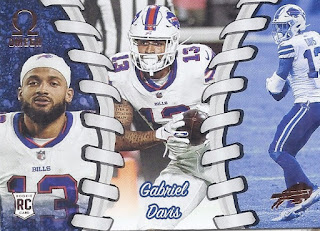 I don't think Panini ever did an official Omega release, but Pacific sure did. And if they can release other Pacific names, they sure can cram one more into last year's Chronicles. 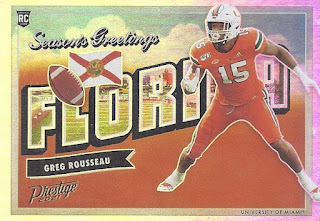 Sure, he's not sporting Bills colours in this card, but this rather different insert out of Prestige of their top draft pick. 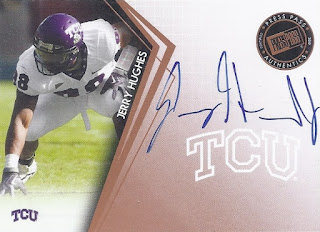 Jerry Hughes hasn't had any autographs since his 2010 rookie season. So, I had to reach back to then to find any ink from  him. Given the choice between a card from a different NFL team and his NCAA days, I'll always opt for the latter. Same as with my Raptors collection. 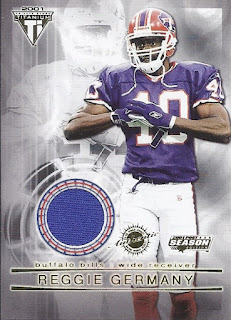 Sometimes, I'll just search for Bills hits on COMC and just add the least expensive one to my inventory. This time, it was this Reggie Germany relic. 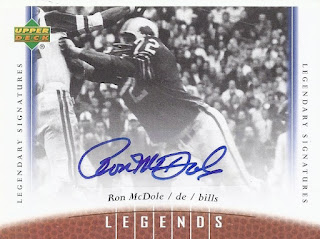 One more autograph to end this post. Legends was another fun product that consisted primarily of retired greats, even if the checklist seemed to lean towards "available to sign stickers". I busted a box of it a couple years back, and it was a lot of fun to work my way through, even though I didn't complete the base set. The joy of the set came from coming across cards of guys who hadn't been and haven't been seen much in products since then. McDole would be one of those guys, with only a pair of Hero Decks appearances since this. And he's got an autograph that's definitely one of the more legible ones available.