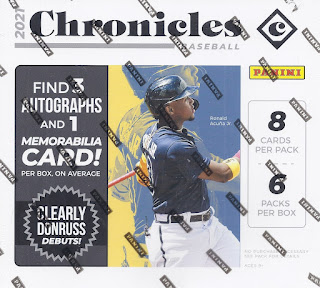 If you thought I was lagging on posting mailbag stuff - this is 1 of 2 boxes of Chronicles I busted back in late November that I'm finally getting around to posting the content from. As for the second box, I'll probably procrastinate on that  well into February.
Pack 1: And here's your first card out. As always with Panini, catchers look the best as there's no need to edit out any logos. 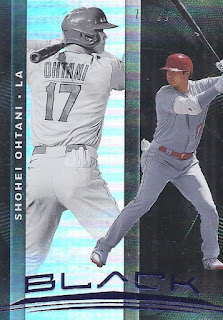 Here's the first numbered parallel of the break. A blue parallel on a design from Black. It is a little hard to tell on the scan, but this is /99. As when I pulled the base card of this, I still think this would look great with one photo as a pitching card to contrast with the hitting photo. 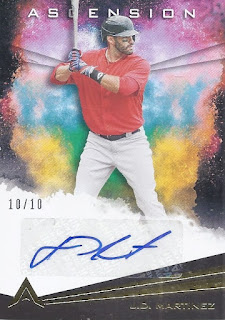 I guess this is the big hit of  the box. A few years back, I pulled a redemption for Martinez out of Stadium Club. Over a year later, I got sick of waiting and requested a replacement, ending up with a  DJ Peters Bowman Refractor /499 from Bowman. I don't think JD's card was ever produced. Three years later, I pull a live auto. It is a sticker, but it is low numbered for a trade-off. Either way, now I have one. 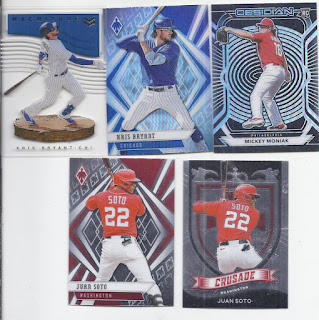 And the rest of the pack, with not a  lot of  player variety.
Pack 2: 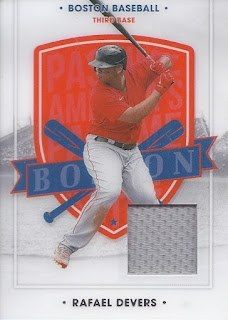 I realize it is going to be all downhill after that first pack, but here's the one-per-box relic card, of which the relic-only cards seem to be exclusive to only the America's Pastime this year. Which, given the solid design, I'm perfectly OK with. 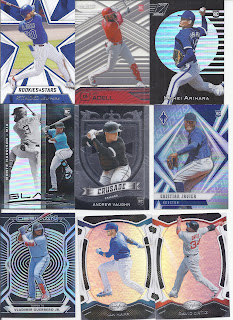 Looks like this is a 10 card pack. The best packing errors always err on the side of 'more cards'. Obsidians are one-per-pack in hobby format, and I'll always be happy to add a  Vladdy to the Jays  collection, joining an Alonse for the Mets collection. The Javier is a holo Prizm parallel, just in case those 2 Certified cards weren't shiny enough.
Pack 3: 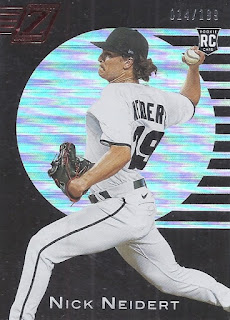 Here's the second numbered parallel in the box, with the numbering much more legible than on the Ohtani. 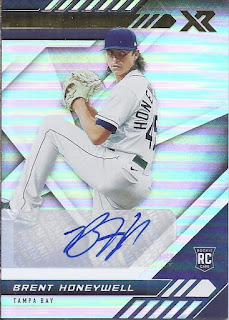 I have no idea who this is outside of his appearances on cards. He did make his debut in the majors this year, with 3 appearances and an ERA over 8. So, at least he's pitched more innings in the bigs than I ever will. 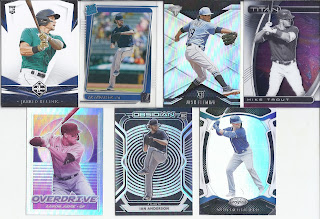 Just a 9 card pack this time, with another shiny Prizm parallel, this time of Aaron Judge, being the most notable card here, along with it being an Ian Anderson hot pack.
Still one more autograph to go in the next post, along with some nice parallels in the second post.
Posted by buckstorecards at 07:11