It is the latest addition to my autographs of performers from MST3Ked movies. 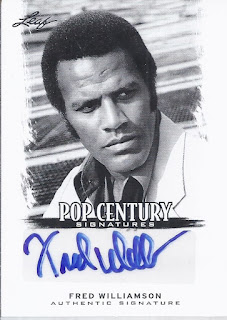 From episode #501, Warriors of the Lost World, it is Fred 'The Hammer' Williamson! Given that he has been in a bunch of B Movies, it is surprising that only one film of his made it on the show, although several have been Rifftraxed.

At this point, I have 4 more autos of this type on the way, including two from people that appeared in the same film/episode.

Posted by buckstorecards at 05:05