And the rest of the box. 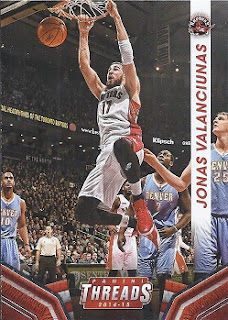 A good way to start the pack - first card out is a Raptors card. This would be the only Raptors card I pulled from any of the basketball boxes. 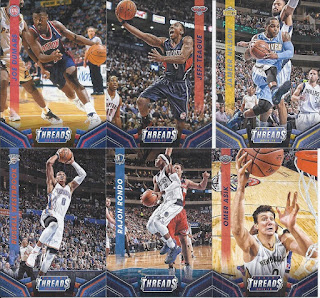 As for the rest, the may have over used photos from the backboard in this, but I love that Omar Asik looks absolutely terrified. 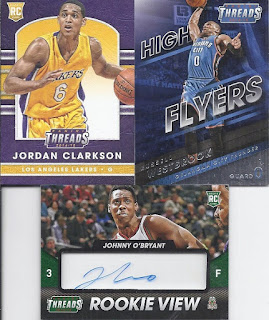 The inserts bring my second autograph, and my second Rookie View of a Bucks card. Johnny O'Bryant isn't quite Jabari Parker, but at least he's playing on this side of the Atlantic. These are supposed to fall at a rate of 1 every 13 packs, so I definitely did better than expected landing two of them. Clarkson is another one of those faux-leather feel cards. 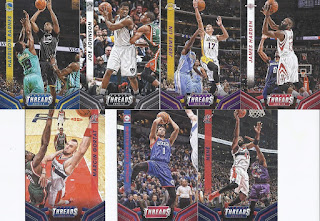 Nothing too amazing among the base cards here. 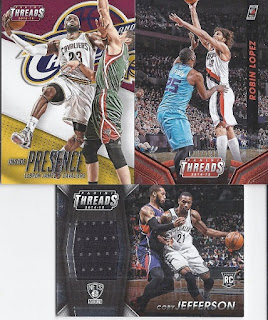 But the hits bring my final hit of the box with the Jefferson relic. This, like the previous James Young, is /199. Robin Lopez is a red parallel, and a LeBron insert card is still a LeBron card. 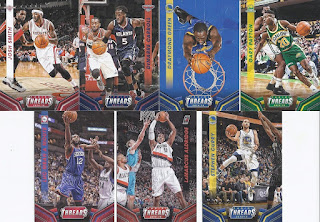 A couple interesting cards here in the final batch of base. That's a lot of blue on Draymond's card, but that allows the hoop itself to really pop in the middle of the card, and make the basketball seem tiny in comparison. And there's a Supersonics card too! 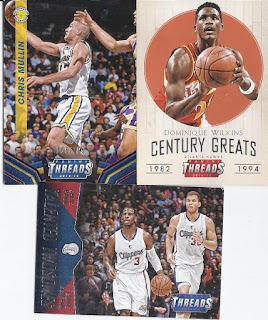 I wasn't expecting a hit here, but a couple HOFers among the inserts make it a satisfying way to wrap things up. A good number of keepers, plus one card that should cover the cost of the box in yesterday's post make this a successful break. Staying with basketball next time, this year's Court Kings is scheduled next.
Posted by buckstorecards at 10:52