And now, I start with the boxes. I'm continuing this chronologically, starting with 3 of the 6 packs from this box: 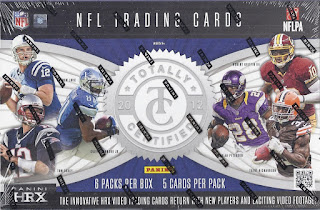 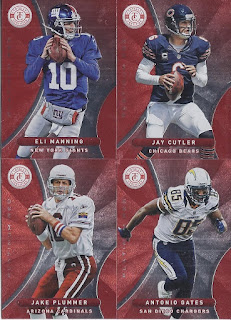 The base cards are very red. Platinum Red, in fact. The final 3rd of the 100 card non-hit base is for a legends portion. Somehow, Jake Plummer was considered as such, but I do like the oddness. Other more obscure choices for this included Fred Jackson and Bernie Kosar. 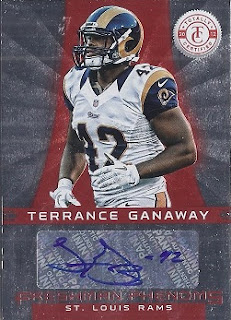 The hit isn't the most spectacular. Terrance Ganaway played one season in the NFL, the retired to go to grad school. So, he's definitely smarter than the average bear...ram. 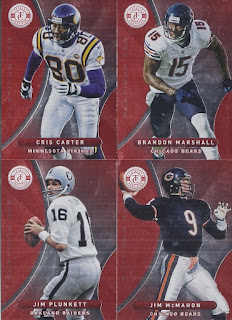 3 out of 4 from this pack were from the legends portion, with only Marshall being a current player. The McMahon looks really nice with the red background as the dark uniform offsets some of the loudness in the background. 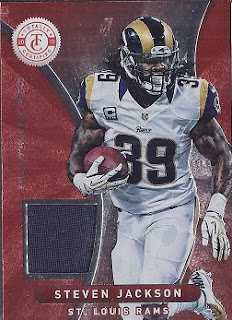 More Rams love in the second hit of the box, with a relic from Steven Jackson. At least it is game-worn. 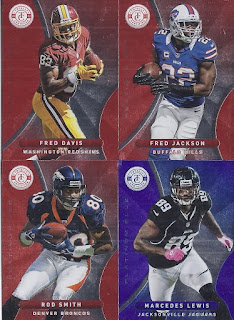 A Bills card! WOO-HOO! At /199, the Lewis parallel was the only base parallel I landed. 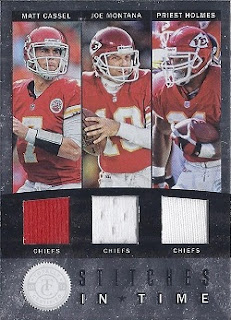 And I leave St. Louis, but stay in the state of Missouri for the final hit. And when I think of Joe Montana, I think of his time with the Chiefs. Still, despite it being a tiny swatch, and it being shared with Matt Cassel, Joe Montana is probably the biggest name I have a football hit of. The card is oddly-numbered, though. For some reason, it is /93.

And that's 3 packs. The other 3 are tomorrow, where things get redemption crazy, but also even more interesting, with what would have been an insane pull for 2012.
Posted by buckstorecards at 09:28