Time for the final 3 packs.

A very Raiders pack. I guess I'll have to wait a season or so to get 3 Raiders locations in the same pack. But only 3 cards? 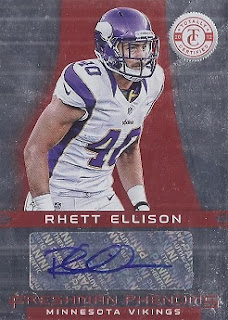 Here's the hit. Still in the league, and he's just signed with the Giants. But what's the 5th card? 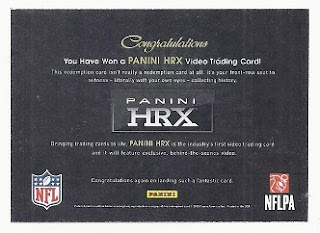 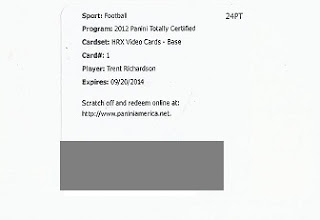 Wow. While this obviously would have been even better a couple years back, this is still an insane pull. This is for a video trading card. The base version of this is limited /40, with there also being /10 and /1 auto parallels. You can take a look at the Andrew Luck version of it here:
The Luck is obvious one you wanted from this set. The others were Ryan Tannehill, Robert Griffin III and Justin Blackmon. At least the one I pulled wasn't the perpetually suspended member of the fivesome. While this was entered into Panini's redemption site without any problems, I'm still doubtful it will come through. But if it does, a Crimson Tide alum-collecting JayBarkerFan will be getting it. 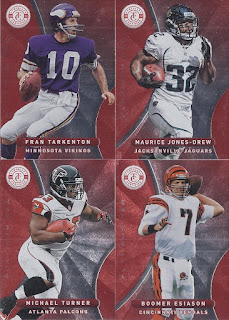 This will be a step down from the previous pack, but here's the base. 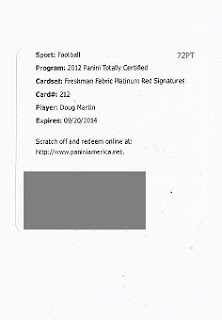 Another redemption. This one does look to be live. I'm more than willing to wait to land an auto/relic of a guy nicknamed Muscle Hamster. 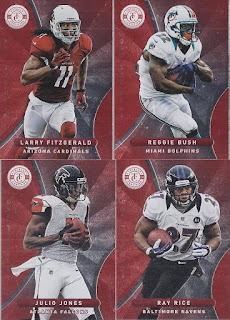 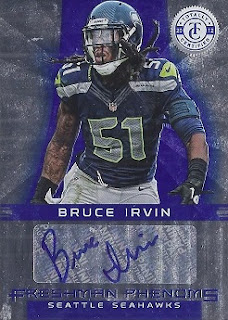 And the final hit is actually a parallel autograph. The blue versions are /99. Bruce is a West Virginia alum, and this final card of the break is on its way to Bob Walk the Plank as I type.

Posted by buckstorecards at 09:03