It Came With the GQ Boxes - Part 2 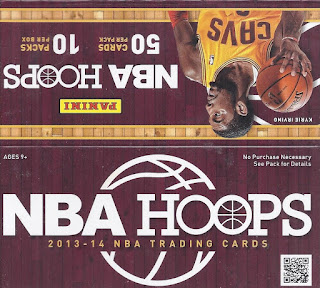 Although I had the complete hand-collated set of this, I didn't have that many of the inserts. Given that there are 7 sets, with 2 cards each per 50 card pack. With 25 cards per insert set, I should do significant damage to them. And I did, ending only 8 away from all 175. No dupes in the base, so I ended up about 20 cards away from a second base set.

Let's dig into the inserts. 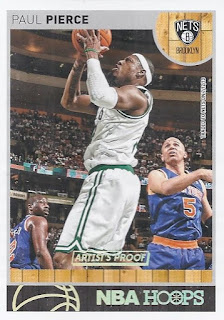 These Artist's Proof cards fall 1 per box. Nice that it was a player from the upper percentile of the checklist. 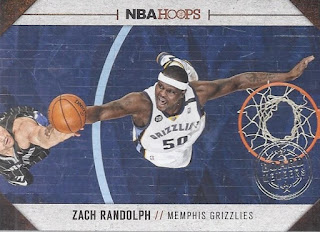 Insert time! I'm just doing these in the order they uploaded. Board Members salutes the rebounds stat with photos from the roof. I love Zach's expression on this. 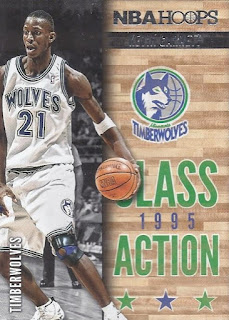 Class Action salutes the various NBA draft classes by highlighting a player from various draft classes going from 2012 (Lillard) to 1988 (Richmond). As always, the best thing is the logos used on the card match the team's at the time. 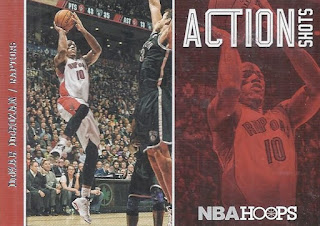 Action Shots is probably the least necessary of the bunch. Aren't those what are pictured on the base card? Either way, seems like a nice place for a Raptors card. 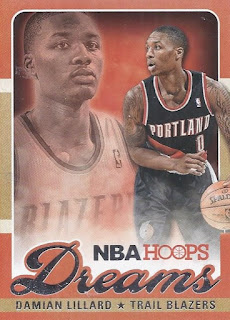 A subset devoted towards younger, but not rookie players. Really nice design here with the background of the cards in the team colours. 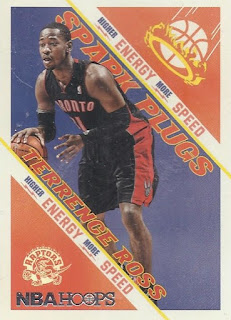 A set devoted to underrated players. Most of the images have the photo with the player angled to better fit into the window. So, of course, I choose the worst example of the photo choice just because it is a Raptors card. 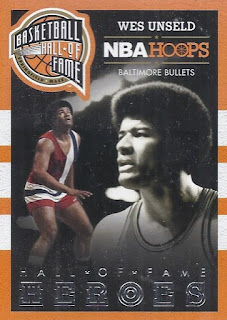 The HOF Heroes is easily my favourite of the lot. The orange border fits the HOF logo, and the photos have a nice look with the B&W image being set ahead of the colour one. Plus, in this case, it looks like Baltimore Bullets uniform is a onesie. 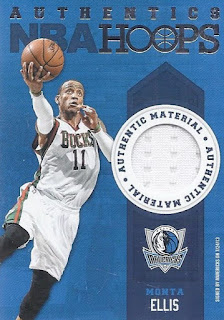 Hit time! Still with the Bucks in the photo, but listed with Dallas to reflect a signing. The back of the card stated that this was a Bucks uniform. Given that he's pictured as such, and that they couldn't have acquired a suitable Mavs jersey between the signing and production of the card, was that needed? 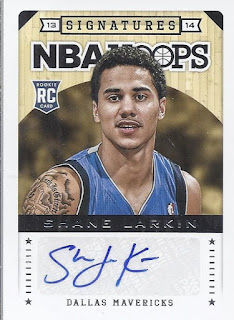 The first of 3 autographs (only 2 promised) was of Barry Larkin's son. He was a first overall pick of Atlanta, and was quickly sent to Dallas. He bounced around with the Knicks and Nets, and spent last season in Europe. 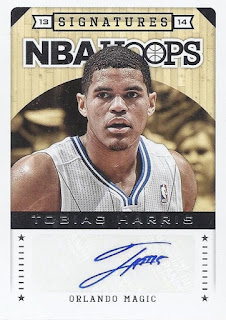 Tobias Harris has also bounced around, but really seems to be reaching his stride now that he's with the Pistons. He does have an interesting signature, with the the lower portion of the T continuing on into the H, followed up with his number. He was still a Milwaukee Buck when this was signed, as he didn't wear #15 with Orlando, instead sporting #12. 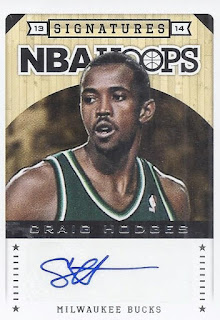 And a rather interesting one to end this. I think of Craig Hodges from his time with the Bulls championship teams in the early 90s. but he's pictured with Milwaukee here. He spent 4 seasons with both teams, but slightly more games with the Bucks. He's one of two people (Bird) to win 3 consecutive 3-point shootouts during All-Star weekend. Best of all, he doesn't have too many certified autos out there, making this a really neat acquisition for the collection.

And there you have it. To wrap the mailing up, a box of  65th Anniversary Topps Archives next time!
Posted by buckstorecards at 09:38