Wrapping up this repack. 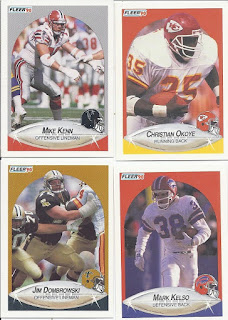 Okoye gets scanned simply because I loved the nickname 'Nigerian Nightmare'. A Bills card also appears. The scans wrap up with a pair of 'rare for 2017, not so much for 1990' OL guys. 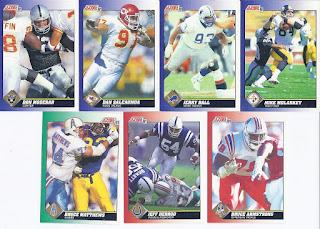 We start with a future Bills coach, followed my another position you don't see much in 2017, nose tackles. Some more OL cards end it, along with a grea photo of Jeff Herrod ready to pounce.

Another Bills card and glossy OL parallel. Not bad. Schaub hasn't been In The Zone for a few seasons now. 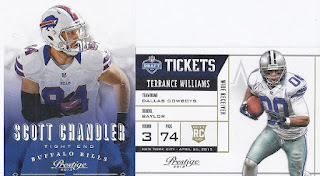 At least there was a Bills card in the final, none-too-exciting pack. I wish the Tickets insert looked more like a ticket (ala Contenders), but its OK as the second most interesting (to me) card in this.

And there you go! And I still have about a half dozen Target remnants repacks to post.
Posted by buckstorecards at 08:51