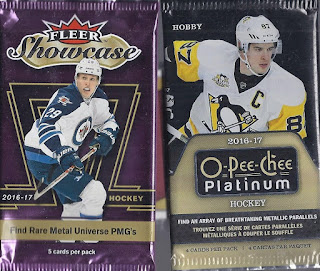 1 pack each of the newer entries on the hockey market. 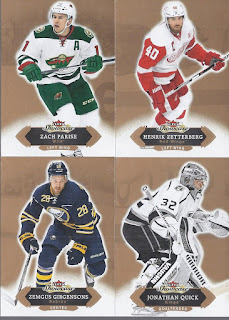 Is there such a thing as too much gold on a card? Unless it is a gold standard release, the answer is yes. The pack configuration this year is the typical UD of 4 base cards, and an insert/parallel. 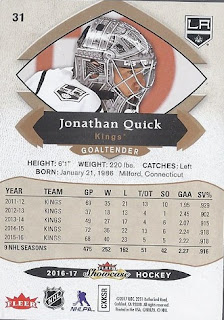 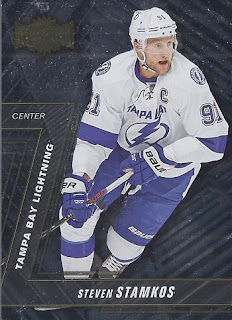 I think these are the most common of the inserts in this release. All I know is that it makes my scanner look filthy and I hate it for that reason alone.

Platinum is a little more random. Generally, three base cards along with the 4th being a rookie or an insert/parallel. Much like with Chrome/Optik, the base photos are recycled over from the regular OPC issue, although Connor Brown is given a different photo from his base release. 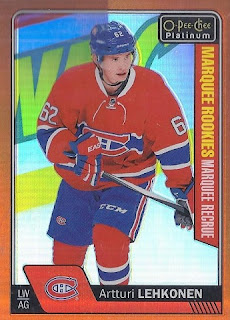 And the 4th card is a shiny orange rainbow parallel. Not bronze. Not copper. Orange. A pretty good get landing a rookie as the parallel as well. Rainbow is to OPC as refactor is to Topps as Prizm is to Panini. 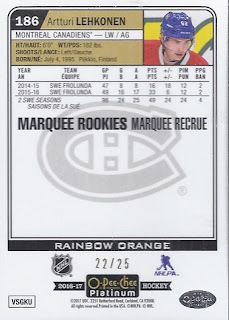 And the backs. Not too different from their regular cousins, just add a re-used image and scrunch the rest of the top-or-the-card info into a smaller box. And, the rainbow is /25, which should at least cover this trip to the LCS.
Posted by buckstorecards at 09:47