Yup. I still have a handful of repacks around from when Target Canada was a thing, just waiting to get posted. The next few days are as good as any to revisit this. 10 packs in the box, and these were them: 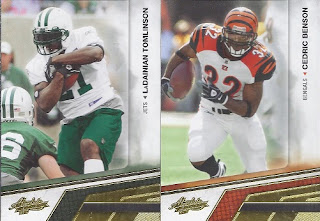 And the first pack is base cards only. A pretty bland grouping photographically speaking as well, but I do like that Tomlinson's card isn't a photoshop special and Cedric Benson's straight-ahead rush. Still, if those are the highlights, bland is the word I have to use to describe it. 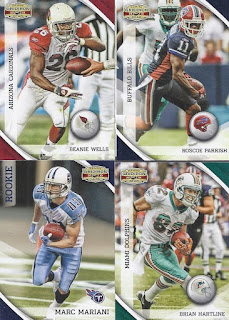 This one is a little more interesting. Firstly, you have a guy named Beanie. Then there's a Bills card as well, and a rookie card (albeit of someone who is no longer in the NFL). I also like the Hartline, since it seems the photo has a slight Gypsy Queen filter applied to it. 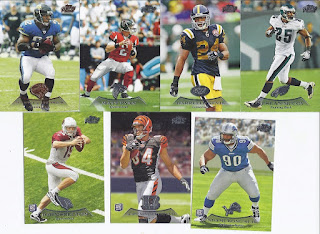 Hey! 7 cards means I can fit all of them onto the scanner! And probably the best of these three packs. A bronze parallel starts things up in the corner. I really like that the Matt Ryan doesn't have a close crop with the photo, setting up a nice contrast with the sideline wall. One the bottom, an interesting photo, as that's not an angle you often see. And one of the #1 draft pick as well.

And there you have it. 2009 packs tomorrow.
Posted by buckstorecards at 12:32