It Came With the GQ Boxes - Part 1

Despite the 2 Gypsy Queen boxes absorbing most of my COMC-->Blowout credit this time, I still was able to throw a couple inexpensive boxes in with them. Those will be reflected in my next posts. 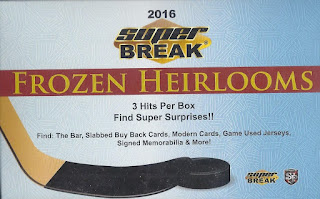 To say people weren't pleased with this upon release was an understatement. $65 for a couple random TTM/IP autographs was not a good value. $20 though? Sounds like fun. 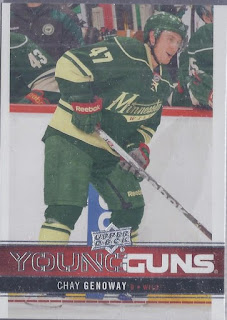 This would qualify as a modern card. It's a YG, but Chay managed one more game in the NHL than me. But, YG are always nice to add.

The buybacks were all within Card Savers. with this across the opening. I immediately freed them from that prison, with binders in mind for storage.

Remember when I said 'random'? Yes. Definitely so. 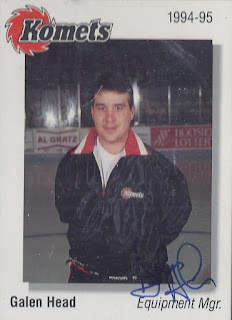 An auto of an equipment manager from an IHL team? Yup. That's certainly random. 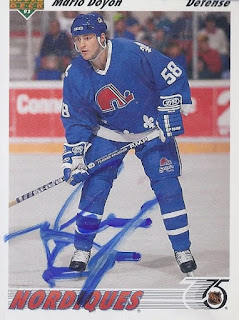 Mario Doyon didn't have the longest NHL career, and this was his only card from his NHL career, as best as I can tell. Still, he did have a long run in the AHL and Europe into the 00's. 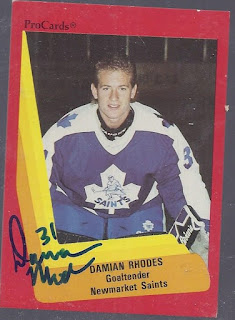 Of the guys in this box, Rhodes easily had the lengthiest NHL career of the lot, playing over 10 seasons with stops in Toronto, Ottawa and Atlanta. He's shown here with AHL Newmarket Saints in a 1990 release. This was probably his first card, and I like how the blue pen doesn't interfere with the blue jersey. 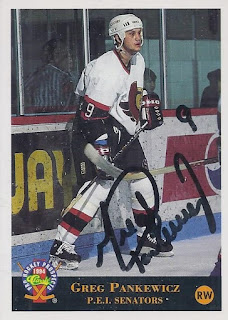 And howzabout a Sens card to wrap things up? Greg played 3 games with Ottawa, but seemingly never got a card in the NHL. So, this will have to do. f course, this does easily qualify for my Sens hit binder. Despite NHL experience with both the Sens and Flames he might be better known for placing #7 on this list:
And there you have it. For $65, I'd be upset. But for $20, it feels just right.
Posted by buckstorecards at 09:12