A Bunch of Group Break Sens

Time to hit the ol' mailbag to clear out a couple envelopes before I get fully down with O-Pee-Chee next week. Today, exactly what you read in the title. Starting off, here's some content from a mixer. 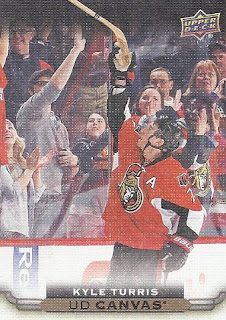 First up was the content from a box of last year's Season 1. I got the base set from this, and this great photo on the Canvas insert. Not quite on par with Bobby Ryan's puppy card from this year, but still nice. 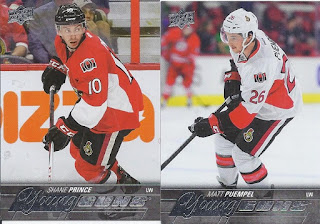 I also landed these two Young Guns as well. While these are dupes for my Sens collection, they aren't in my Rangers alumni collection. Perfect! 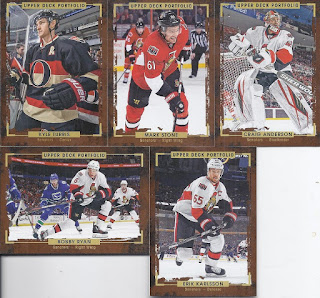 A whole bunch of Portfolio base cards. They really liked that low angle shot. 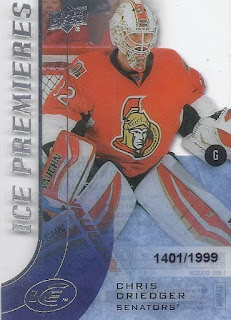 Here's one I know wasn't a dupe - an acetate card of Chris Driedger. He's seen 1 game of NHL action each of the past three seasons. That's consistency! 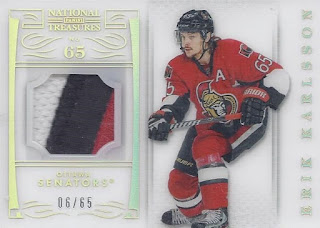 But the big draw in the mixer was a box of National Treasures. That's the one I was hoping to land a card from and did so, with this sweet patch of Erik Karlsson. These are numbered to his number (out of 65 in this case), so I'm hoping for complete symmetry with this swatch being from the number portion.

Off to some new Series 2. 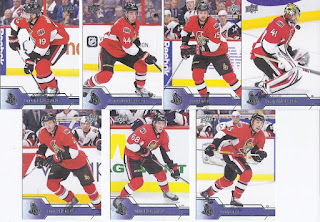 You'd think they'd throw at least one non-red sweater card in the base. 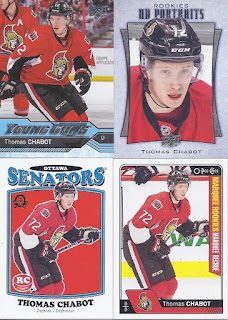 But at least the Thomas Chabot portion of my collection has grown by leaps and bounds. 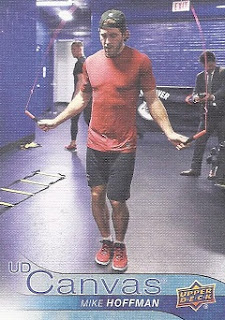 I lose the red jersey, and get a red t-shirt one of the two canvas cards I landed. This is probably my only jump rope card in my collection. 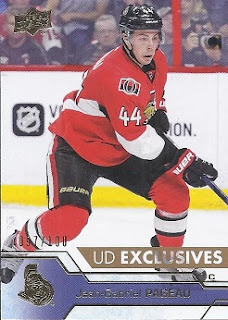 The last of the red sweater cards is on this exclusives parallel. These fall at a rate of about 3 or 4 per case, so this was a nice odds-beater. 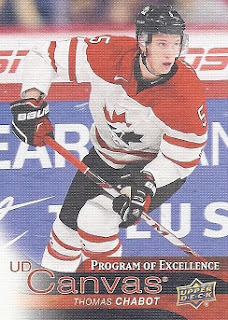 And here's the final addition to my Chabot PC, and the only appearance of a white jersey in this group. These are tough pulls as well, as the PoE cards fall at about 2 per case, and this first time I've landed one in any format. While this technically isn't a hit, I'm grouping it as such for my binders.

And there you have it.
Posted by buckstorecards at 14:12