One of the good thing about e-packs is that the canvas inserts from Series 1 and Series 2 are plentiful, both on the site and cheaply via COMC. As I've never been too crazy about the Young Guns, they're easily traded for a nice number of them. Here's a handful of the ones I had in  the recent shipment. 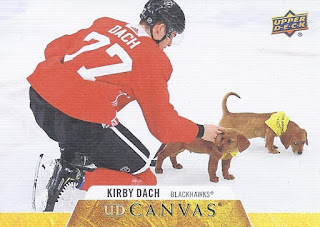 Both adorable and appropriate, here's Kirby Dach with a couple of Dachshunds. 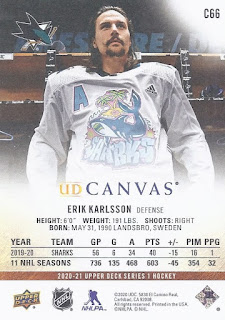 There can also be some interesting photos on the reverse of these cards, such as this Erik Karlsson card. The front of the card does have an interesting entrance photo, but this garment sported on the back is great. Should you wonder about it, it was from an Artist's Collection of Sharks jerseys that were giveaways at games in the 2019-20 season.

If jerseys and photos from outdoor games are more your thing, there's plenty of those as well. 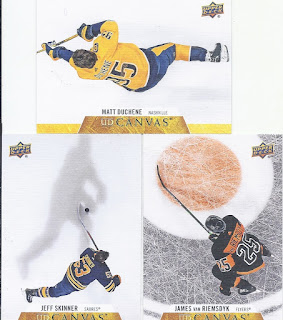 Another theme that appeared quite a bit was overhead photos. The shadow on the Jeff Skinner moves the Kitchener Rangers alum's card to the top of this grouping. 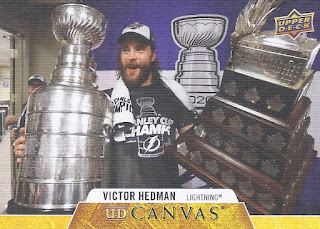 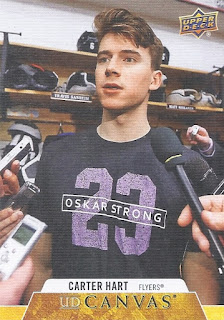 Sometimes, you have to break out the google machine to find out what was going on with regards to some of the photos. 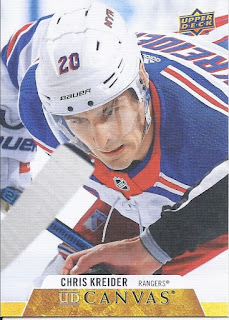 However, it can be just the simplest photos that are the best.
There you have it!
Posted by buckstorecards at 13:00