Basketball Retail? At a Canadian Walmart? Must bust some! 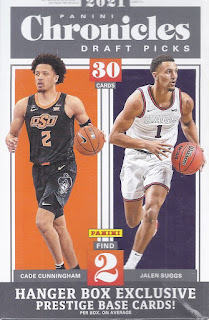 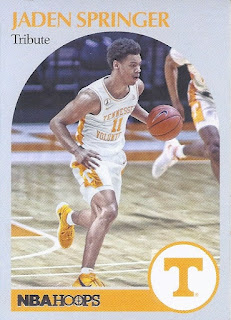 First card from the variety pack that is Chronicles is one of the 1990 Hoops Tribute cards. They were probably the design I was most looking forward to seeing in this, but how accurate are they of a tribute to the original? 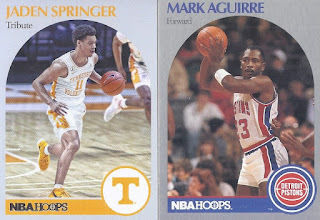 Other than the colour being somewhat lighter than the originals, the fronts look fairly good. The fonts seem to match, which is always a good thing. 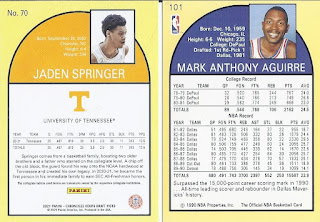 The backs? Not as much so. The "No.". The reused photo. And the logo on the back. Although the lack of stats might make the latter defensible. But considering how many other photos are used a specific player throughout the set, the photo is the big complaint.

Unfortunately for the Raptors PC, I didn't land a single Scottie Barnes card. Fortunately, that was offset with a trio of cards of the #1 overall pick. While there are a lot of players represented in the hits, the top players are all over the base designs. 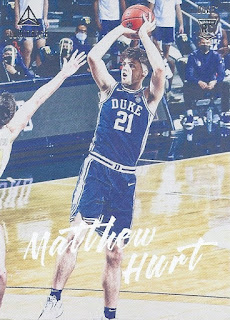 In fact, the only undrafted player among the 30 cards in this pack was this one.

Both cover boys made a trio of appearances in this box. Jalen went 5th overall to Orlando, and got taunted with "SCOT-TIE'S BET-TER" chants when the Magic stopped in Toronto earlier this season. Good thing for the fans the Raptors hung on to win that game, or it would have aged really poorly that night. 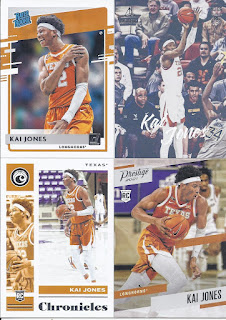 But neither Cunningham nor Suggs won the volume battle in this box. It was Kai Jones, a first round pick of the Hornets. 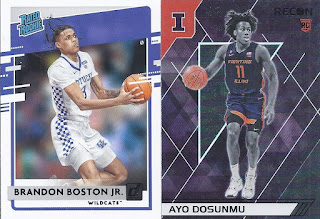 The Prestige cards shown in the Suggs and Jones groupings are exclusive to the hanger boxes, as are these black foil parallels. There's really nothing too spectacular to these, and if you weren't expecting there to be these parallels, where only the foil part is changed, you might not even notice them. 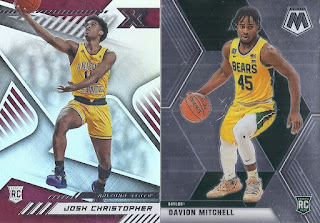 Most of the retail cards were from the first 100 of the base set, which covers the base design, Luminance, Donruss and Hoops. The rest are either the foil designs, or designs relegated to specific formats. Other than the black foil parallel of Dosunmu, these were the only two foil ones I'd  get. XR and Mosaic make their appearances here, but there are others to be found, such as Essentials, Flux, Marquee and Gala.
But no cards yet in the collection of the Raptors rookie Scottie Barnes off this break.
But some group break luck that you'll see next time will change that.
Posted by buckstorecards at 05:52