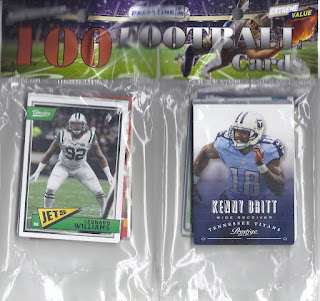 I've only done one repack post this month. That's gotta change. So here's a bunch of football cards. The description fibs, though. There were the expected 50 cards on one side of this, but the other had 56. More cards is no problem, though.

As I usually do with these 100 hangers, I'm scanning every card over this and the following 3 posts. 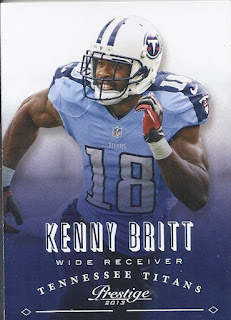 Kenny Britt opens up the 50 card portion. Back when there was some type of variety to the Prestige design, as opposed to rather repetitive "text on a diagonal" that has been used the past several years. 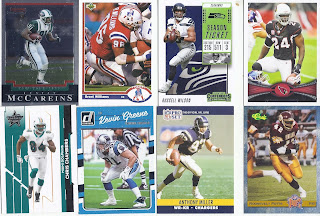 Some Chrome to start it off. 2016 Donruss is one of my favourite lower end designs in recent usage - I love the colourful, albeit random salute to the 1990 design. Plus you got a guy named Roosevelt. Nice start! 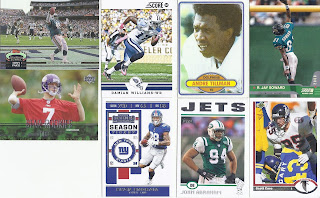 That's a pair of great photos opening and closing the opening line. Jack Murphy Stadium is almost the real star of the picture despite the featured player getting a TD. A whole different type of celebration, one that would now draw a flag, gives Stadium Club a pair of memorable entries. Foil on green doesn't really allow for a name to be legible, so that's Juston Wood on the Star Rookies card. He wasn't, as he never played a game in the NFL. That's still closer to the NFL than I! 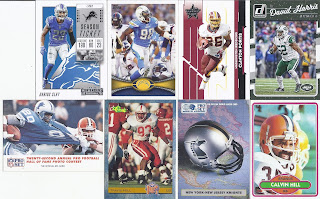 Back when taking a memorable photo was worthy of a card itself! There's also some 1980 mojo in this one, and that's one of several that will show up in this repack. Does this count as vintage? In repack-land, it certainly does!
And it is a perfect way to wrap up the first batch of card from this one.

Posted by buckstorecards at 06:40