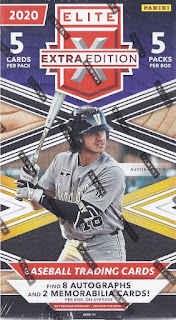 And I wrap up my Expo posts with some prospecting at a fraction of the price of Bowman. Just like Pro Debut, with only some of the licensing! 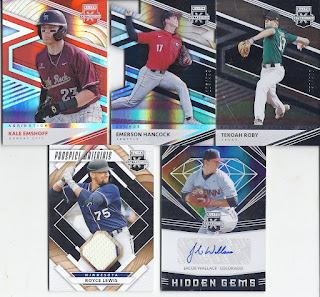 And we're underway! You can see how the licensing works in this - just fine for NCAA photos, not so fine for MLB. The 'hidden' portion of the Wallace auto seems to be a pretty accurate description of that subset, since this card, and its parallels, were the only mainstream cards Wallace has had. Looking at other Royce Lewis relics in this, they alternate between grey and white/pinstripe, and any relic with a pinstripe is automatically the better one.
Pack 2: 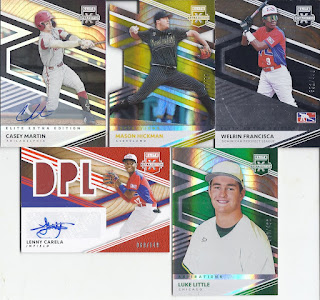 That Luke Little might be the most boring card photo ever, and it was re-used on all his Panini cards. Hickman's golden die-cut will probably be the shiniest card of the break. You can also see one of the more interesting parts of this break - the Dominican Prospect cards. Even if they don't end up signing in MLB, they're unique collectibles.
Pack 3: 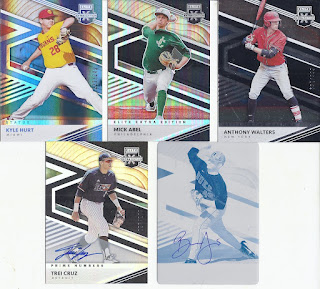 1/1 Mojo! WOO-HOO! I've got a few autographed plates in the collection, but this might be the first one of them that isn't a sticker. Since the name isn't visible, I had to flip the card over to see that the image is of Bryce Jarvis, a first-rounder for the Diamondbacks. Anthony Walters is a Mets card, so at least I've landed one PC card. Trei Cruz is the son of Jose Cruz Jr, and that's about as close I came to a Blue Jays card in this.
Pack 4: 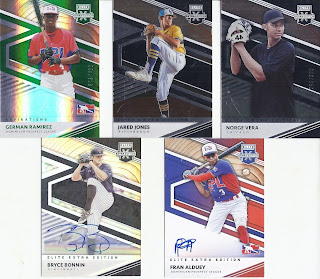 I guess this is a hot box for guys named Bryce. Fran Alduey signed with Cleveland earlier this year, and has made his debut in their minors as well. So there is reason to watch for some of the other names in this product. We also get another super-boring photo with Cuban prospect Norge Vera, but at least it could conceivably be taken during a game.
Pack 5: 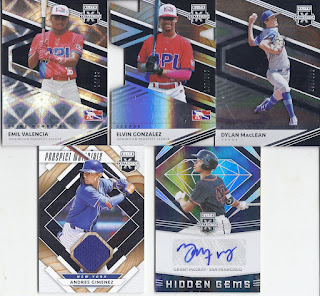 Another Mets card in  the final pack! The Hidden Gem actually has cardboard appearances before, and his father, Rodney, played in the majors. Rodney is probably more famous for something that happened in the minors, though. He's the "run through the wall" guy.
At least he's remembered for something!
Finally, unlike the Cruz from the Prime Numbers parallel set in the earlier pack, the Valencia is actually numbered to a prime number - 59. Don't believe me! Then believe the beloved Prime Number Shitting Bear! 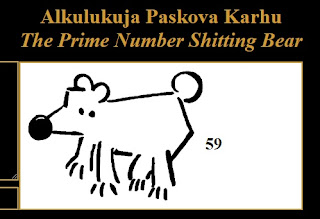 If you can't believe the bear, who can you believe?
And that's the box, and that's the extent of my Expo acquisitions!
Posted by buckstorecards at 08:55