Continuing on the theme of group breaks, here's one more. Not a random this time, but a pick-your-team version. The Blue Jays are a risky buy this year, as they have a very notable rookie in products. But, I figured it was worth the shot, especially with 30 autos in a case. 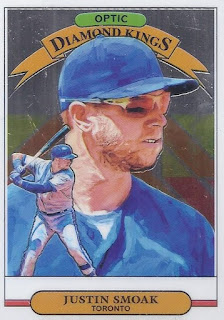 The base set has one veteran card. If it wasn't for Diamond Kings being a part of Optic as well as Donruss, they might not even have had that. 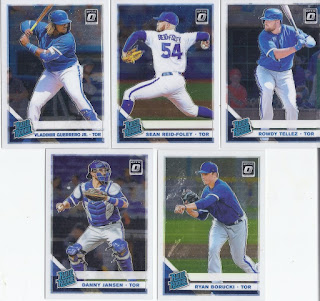 The Rookie content though, that's extensive. The big gun is in the top left corner, but there's still decent content in the rest. All 5 of these folks have autograph possibilities in this. Collation of this though wasn't the best in the case, as there wasn't the Reese McGuire base card. 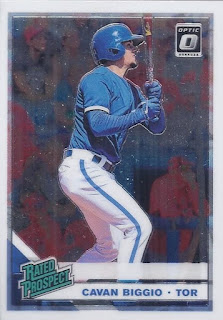 The Rated Prospect insert set adds another rookie to the mix. 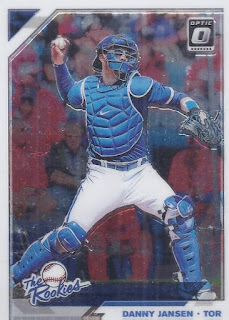 Even more bad collation with "The Rookies" insert set, as I didn't get the Vlad Jr version of this. 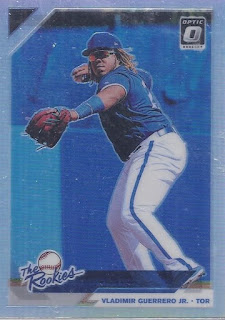 But I did get the holo version of the insert. 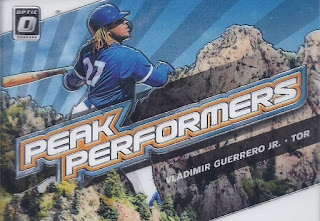 And here's one more insert of Vlad. 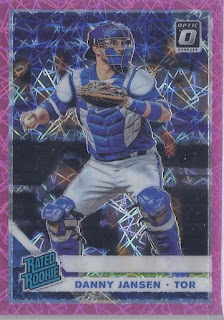 I'll go through the parallels in reverse order of numbering. This isn't just any old pink parallel - this is a Pink Velocity /199. 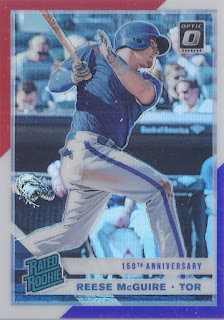 As one can work out from the front of the card, Reese McGuire's sole appearance in the break was on this Red White & Blue 150th Anniversary parallel /150. 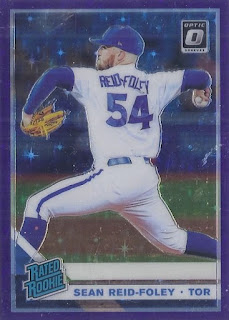 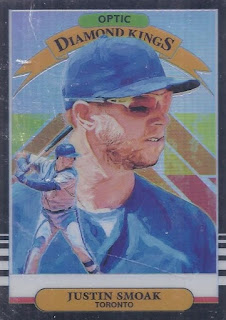 Here's the big card from the parallels, and the simplest named parallel of the bunch. Black, and /25. 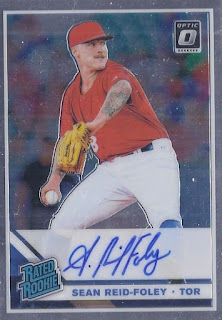 A nice looking autograph to start off, even if it makes it look like the last portion of his name is Foly. And you get the photoshopped alternate jerseys! 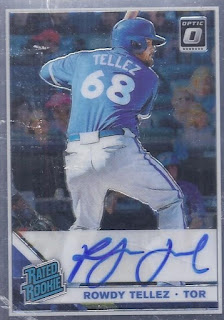 Rowdy Tellez autos have been all over products this season. So, I guess I shouldn't be surprised to be adding one to my collection. 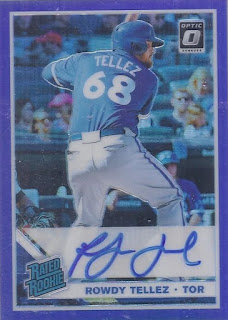 But this is a pretty nice one, it may scan purple, but this is the blue parallel. Perfect for the Jays. 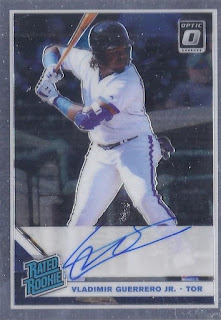 The chase was successful! My first Vladdy Jr auto! Ignore the scanner filth, the actual card doesn't look as filthy. It is a nice photo as well, as he looks to launch a moonshot off of some unfortunate spring-training invitee. 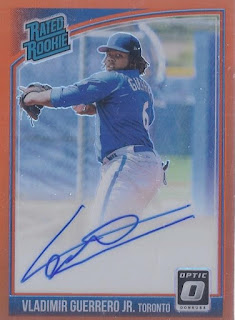 How do you make that even better? How about a second one! This is somewhat of an odder card, as it features the design of last year's Optic, but that's appropriate as the back of the card indicates it probably should have been included in last year's release. 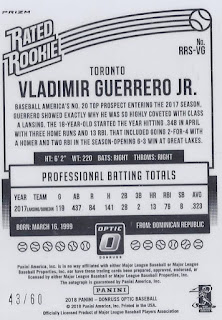 No complaints that it made its way into this year's release, though. Look, it's a numbered parallel as well!

I'll say things worked out quite well. And despite being expensive, it was about half the price of buying the Blue Jays slot in a team break of the upcoming Chrome release.

There you have it! I'll return to my more comfortable home of repacks next post.
Posted by buckstorecards at 10:48