The case may have been finished, but that still didn't totally scratch the urge to bust the product. How about 1 more box, from the LCS? 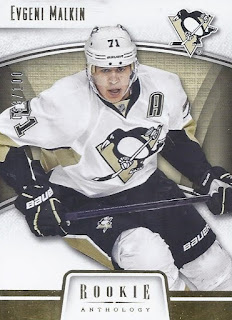 A gold parallel makes an appearance to start off the box. I felt they were less frequent in the case, so that makes for a good start. 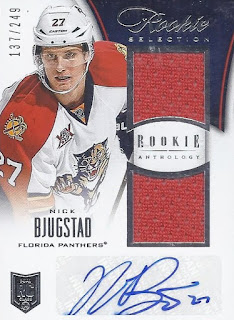 He may have had some issues staying on the sticker, but this is still a pretty good card for the Rookie Selection of the box. 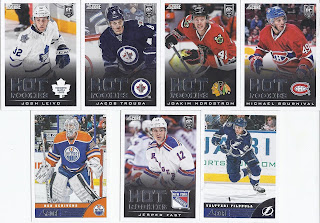 Your Score base. Lots of repeat faces here from the case, continuing the unimpressive collation from this portion of the inserts. 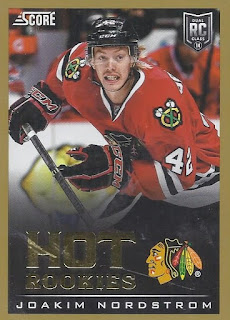 But at least the gold parallel was a new one. 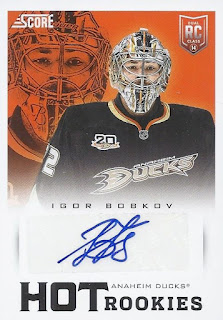 But the auto wasn't, having pulled it in the first box of the case.

Your Prizm base cards. 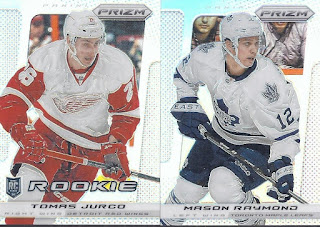 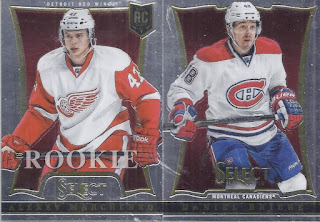 The Select starts off pretty similar to yesterday's post with the base cards. Marchenko and a Canadien. At least the Hab was different, getting a Briere as opposed to a Vanek. 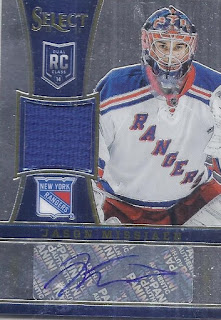 No shiny Select parallels with this box, but here's another relic/auto from another goalie who only saw NHL action from the bench. Still closer than I'll ever get, though. 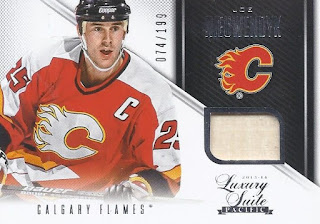 That wouldn't be the Flames uniform era I'd necessarily salute with the photo, but this is a perfectly fine player to get a stick sliver from. 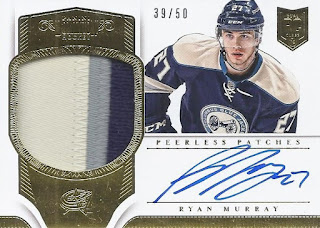 A Peerless patch? Yup, this is pretty good. A rare appearance of silver on a Jackets patch, combined with an on-card auto of a player still in the league? That would be a very nice way to end this journey through 13-14 RA.

But I can do one better.

With the very last pack, to be even more precise. 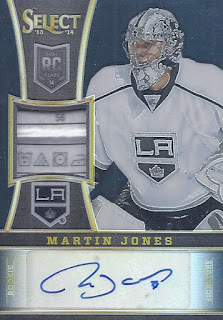 Yup. That's a nice card to end this on. This is my first ever laundry tag relic, from any sport and any product.  Much like with the Ryan Murray, it is of a player still in the league, to make it even better. It is also surprisingly understated in terms of shininess. There's a slight prizm-y to it, but considering how the Prizm 1 of 1 from earlier could light up a room during a blackout, this is serene. And a sure keeper, unless someone has a 1/1 laundry tag/auto for one of my PCs. Then I can be  had.

And there you have it. Another case of RA broken (plus one). And a pretty solid break at that.

Next up, some Chronicles NBA, about as similar a product to RA as you'll get today.
Posted by buckstorecards at 09:35