Starting with the Pelicans content. Already, 2 of the 3 players featured here have moved or been moved to new teams, with only Holiday remaining. I do like that all 3 are sporting different uniforms in their photos. 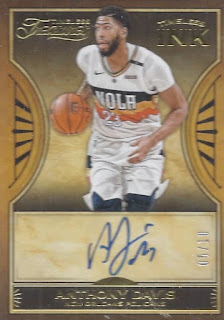 It does feel strange to show off the biggest card in this post so early, but when it is the only other Pelicans card, I guess that's how it works out. This will probably be one of Davis' last on-card autographs with the Pelicans, and given how his time with the team drew to a close, I'm really surprised he was still willing to sign these cards, and not just leave it to a sticker. 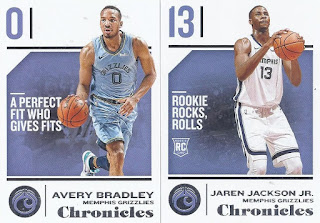 Only two regular base cards for the Grizz. 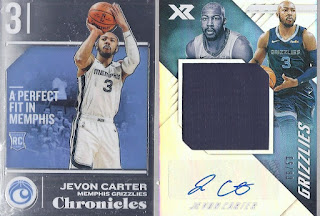 But in this case, the team's rookie content makes up for that. Here's a pair of Jevon Carters that I've already put aside to send off to former blogger, still WVU collector Bob Walk the Plank. Here's the first appearance of XR in the break. 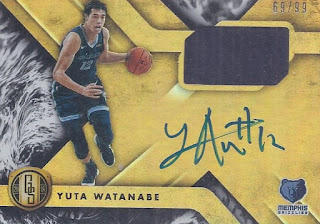 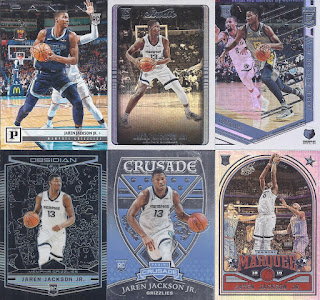 Rookies and Memphis means one should prepare for a lot of Jaren Jackson Jr. Obsidian makes its break debut, and its appearance is the most interesting. 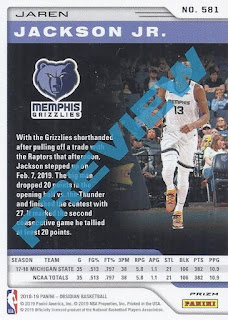 As unlike with the rest of the base cards, this isn't listed as a Chronicles card, but actually listed as Obsidian. With this, and the PREVIEW stamp, does that mean that we can look forward to an actual Obsidian set? 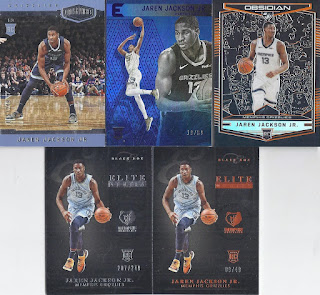 2 more new sets as we hit the numbered triple J cards, with Elements and Elite Black Box debuting. I liked how Elements looked in Chronicles baseball with the use of different photos, and it looks just as nice here. 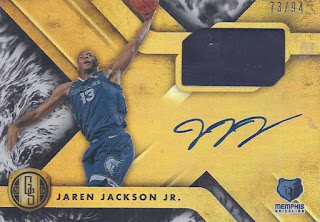