Box Break: All About the Titanium - Part 1

I'm probably going on a box break kick for the next while as I get caught up again. 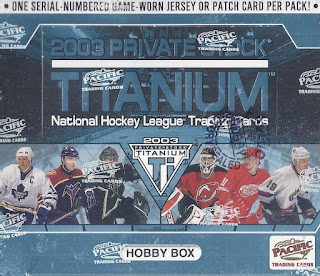 For the second time this year, I'll head to 2002-2003 with a box of Private Stock Titanium. While I wouldn't expect to do as well this time as I did with my box of SP Game Used, I'll still get a nice collection of relics from this box.

There's 8 packs in the box, with 8 cards per pack. The configuration was consistent. 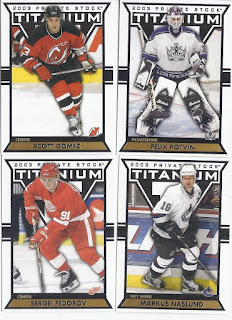 There's 4 regular base cards from the 100 card base set. The remaining 40 cards are serial numbered rookies numbered /1475. Of which I landed exactly none in the box. 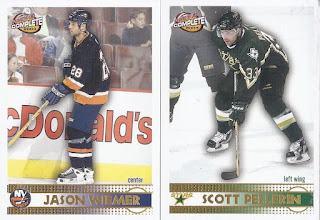 There's a pair of cards from 2002-03 Pacific Complete, which was a large set with base cards in multiple other products. Imagine Topps Total, but with specific groups of cards exclusive to all releases, and you'd have Complete. In this case, cards #301 through #400 are in PS:T. 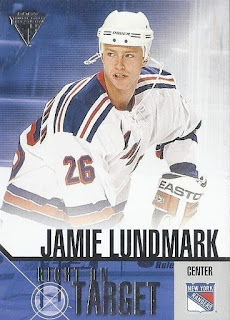 Card #7 will be an insert or a numbered parallel. Right on Target was a rookie/sophomore themed insert set. 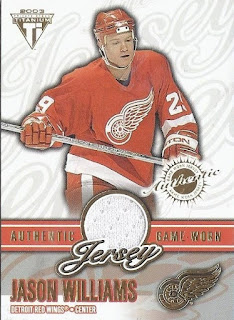 And your hit. The base swatches can be numbered to anything from 150 to 1403, mostly in the 4-digit portion of that spectrum. Jason comes in /1270. 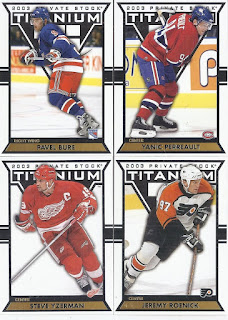 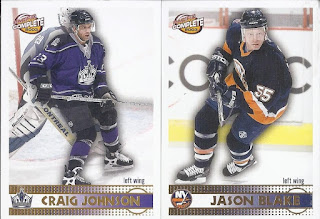 And your complete cards. I'd completely forgotten about that alternate design of the Kings uniforms, despite it lasting for several seasons. 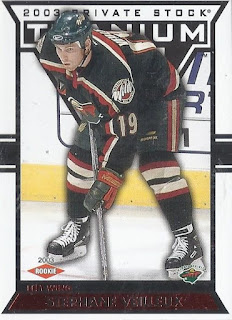 This is an example of one of the red parallels, all numbered /299. This was the only card I got from the rookies portion of the 1-140 card set. At least he had himself a decent NHL career, going into the 14-15 season. 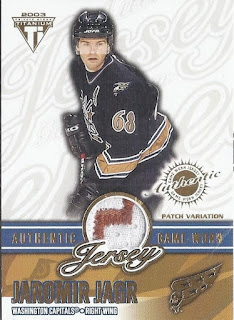 It looks like the patch cards fall one-per-box, and I really can't complain that the one I land is a Jagr. And somewhat of an off colour to land as well, since you generally don't think of brown as a Capitals colour.

I'm only hitting the highlights and inserts/paralles the rest of the way. 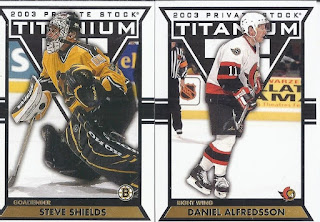 Not a bad couple of base cards in this one, with a nice card for the mask binder, and a new Alfie card for his PC. 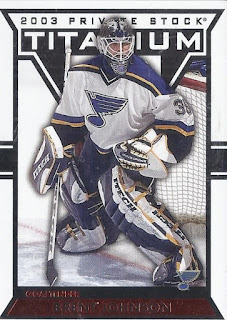 The mask binder will also get a numbered card with this Brent Johnson parallel. Black text on red foil may not have been the best idea in retrospect. 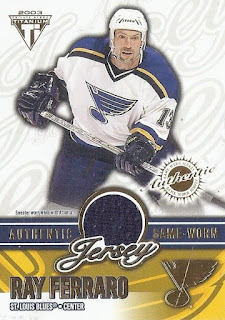 Your hit brings an era I completely lapsed on - Ray Ferraro as a member of the St. Louis Blues. The fact his stint there lasted all of 15 games is the likely reason I remembered none of it. The back lists the jersey as being a Thrashers one, which makes more sense. 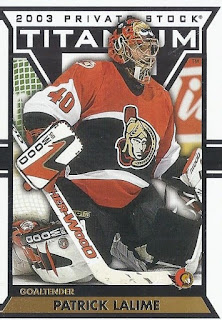 Good stuff for my mask binder in this, as one of my favourites makes an appearance with Lalime base card. 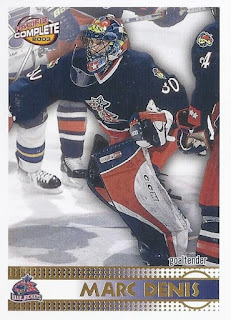 As does Marc Denis with another one of my favourites from the 00s. 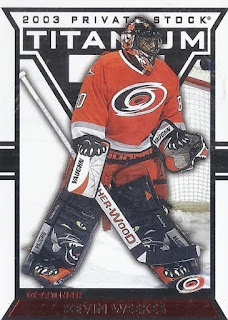 Kevin Weekes does count towards the collection, but he's in a distant third with very little beyond the team logo. 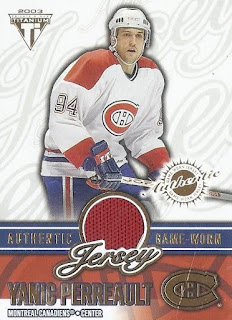 In a group that included a Jagr patch, this is a pretty bland way to end the first four packs. At least it isn't a plain white swatch.

Posted by buckstorecards at 05:21