Time to wrap up the case! 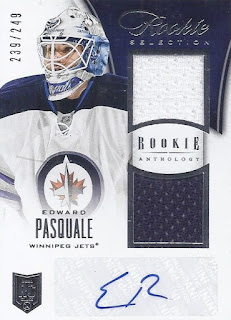 The last of the Rookie Selections in the case. Pasquale was one of those back-up only goaltenders, but he finally got into games last season, playing a few games for Tampa Bay. That's quite the wait. I do wonder if there is some sort of record for the time between getting a card at the NHL level, and actually seeing game time for a netminder. 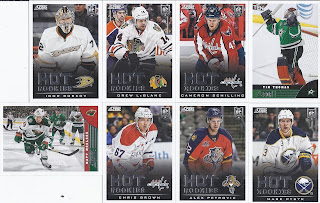 Your Score base cards.

And the gold parallel. 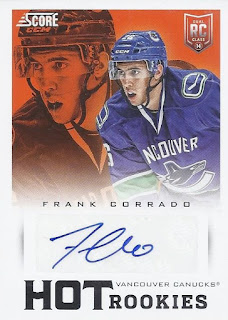 Score's autograph content ends with another Frank Corrado, who we've definitely seen a lot of in this case. 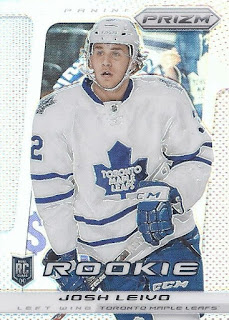 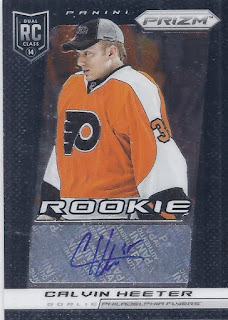 Prizm auto! Calvin Heeter appeared in a total of one game for the Flyers. His only NHL card where he isn't wearing the cap is in Contenders. 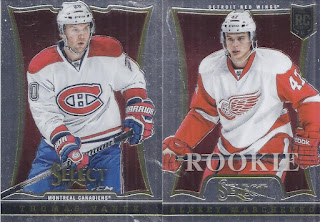 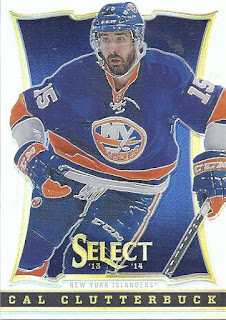 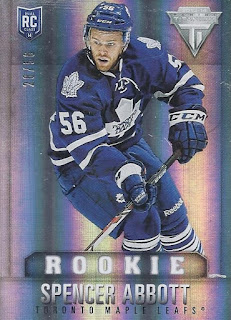 Back to the base cards again, as this is considered a true rookie card of Abbott, since it is numbered to his jersey number. It isn't the most spectacular choice from the set, as he managed only 1 game for Toronto, and later 1 for Chicago, before heading across the Atlantic. 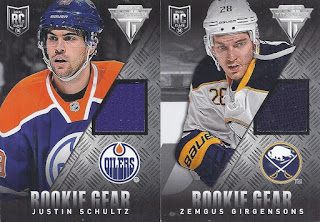 Strange collation might be the theme for this case on the whole, as I think this is the first box I've seen with 2 Rookie Gear cards in it. 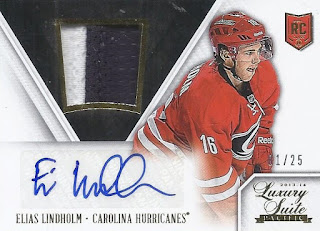 This too, is a pretty appropriate card to end the whole case on. Lindholm was another player to make several appearances in the set. As I wrote on his first appearance, he started showing why he was the #5 pick in the draft this past season, averaging just under a point a game on Calgary's top line.

And there you have it - my third case of this stuff put to bed. But I still have one final box to go of this great product. Since you can't really pass on the chance to rip the product once you start. That's the next post!
Posted by buckstorecards at 06:32