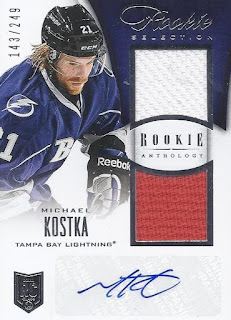 Starting off this one is the base Selection card of Michael Kostka. There was definite variety to his 2013 releases. He'd start off with the Leafs in early releases, but would make his first 2013-14 season appearances with the Blackhawks. He would be waived, and then move on to Tampa. His Blackhawks card would have obvious Leafs swatches on them, and then his Tampa cards would have Chicago swatches. Also, most of his cards were in Panini releases, but UD still dumped some stickers in obscurer releases like Overtime and Priority Signings. Confused yet? 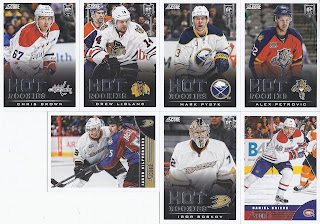 A rather uninteresting bunch of Score base cards, but there are some trade package fillers in there. 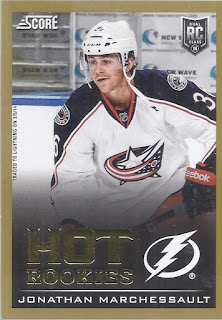 Hey! That's a pretty good player to pull on a gold parallel! He's nicely fit into the system in Vegas, even though last season was a step down statistically from the first year for him. 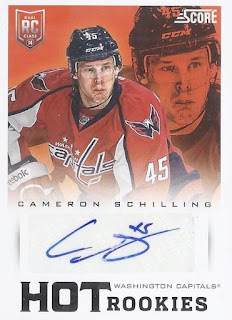 And an auto. Schilling is still playing over on this side of the Atlantic, spending most of last season with the Manitoba Moose, but still playing a few games for the Jets. 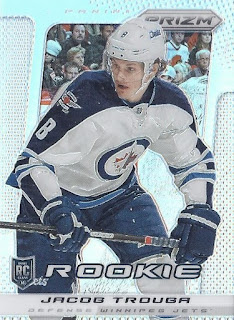 If I'd only bought one box, this would have been the one I'd purchased. Simply because this is the third Michigan Wolverines alum so far, and I always seem to be a magnet for those in my breaks, and henceforth future TMV trade envelopes. This time, the Michigan content was very compact, landing pretty much only in this box. 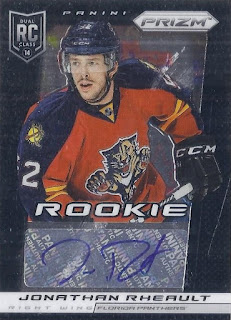 An auto of a guy on the Panthers named Jonathan, but not with the last name Huberdeau! Variety! 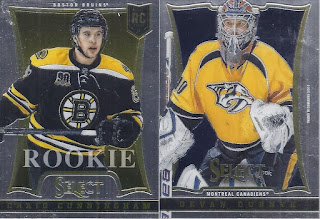 That Dubnyk card is awesome, as it really shows how traveled a player can be in one season. That's definitely an Oilers paint job on the mask, with him sporting a Predators jersey, and being listed as with Montreal. He'd never wear the Habs uniform for game action, only seeing action with their AHL team. But I guess things worked out pretty well in Minnesota for him. 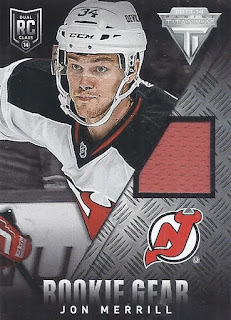 More Wolverines content with the only relic-only card of the box. 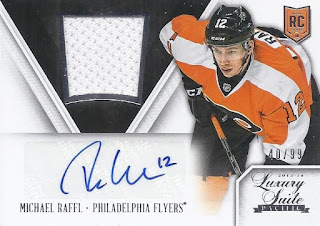 And this one ends with some Luxury Suite. Raffl's still with the Flyers, and is one of only a handful of players born in Austria to reach the NHL.

The best card probably wasn't a hit (Marchessault), and neither was the most interesting card (Dubnyk), but that just shows how random any of these breaks can be.
Posted by buckstorecards at 15:35