There's More to Chronicles than Baseball

If you've read this over the past 6 months or so, you'd know that I was a huge fan of the Panini baseball Chronicles release. Lots of set designs represented over the sets. While basketball wasn't quite as extensive in the designs covered, there is still some variety in there. I got into a case random of 17-18, and the randomizer landed on Minnesota, Philadephia and Boston.

The base are exactly what you'd expect if you opened 2017 Chronicles Baseball. I'm just opting to showing off the Timberwolves base cards because I didn't land any of the 'other set' cards for them. 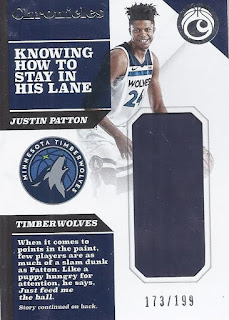 The only other card I got for Minnesota was this Justin Patton relic. Most of the available hits and inserts in this were limited to rookies such as Patton, which really did give it the feel of my beloved Rookie Anthology hockey. 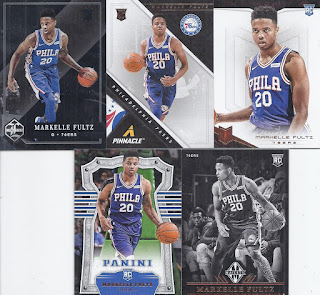 Rookies and the 76ers last season meant you'd be seeing a lot of Markelle Fultz, and here's 5 of his cards. Limited, Pinnacle, Momentum, Panini Football and Majestic all make appearances here. 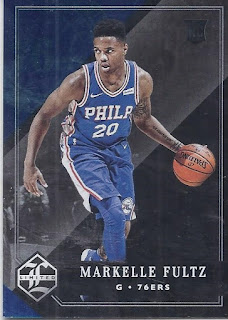 Here's the second numbered card of the post, a blue parallel /149. This looks really nice with their team colours. 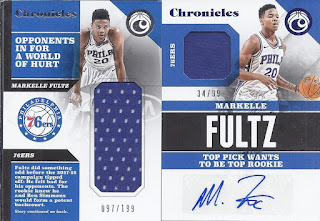 And a couple hits as well for him. I'll hope he gets things straightened out with his shooting game in Orlando, before these go the way of Anthony Bennett cards.

It wasn't until I hit the Celtics portion of the cards, that numbered parallels started appearing. I'm not sure why rookies were numbered on the back, and veterans on the front, but there you go. The reds are all numbered /299. 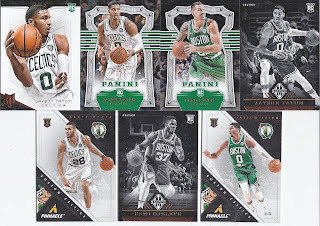 If you get the Celtics, you're chasing Jason Tatum cards. While I didn't get a hit of his, I did get 4 inserts. 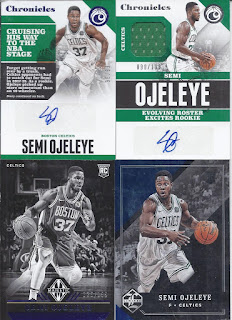 It was the other Celtics rookie from last year, Semi Ojeleye, that I hit big in. 4 numbered cards, two with autographs and 1 having a relic join it. Not a bad haul for my secondary NBA team collection from this.

There you have it! Tomorrow, I'll finally show off some Heritage!
Posted by buckstorecards at 11:57